Yes, There Really is a Rahway Yacht Club

Back in the early 1970s, letters were mailed out (no email back then) to the leaders of all the local clubs, schools, and churches inviting them to an initial meeting of the Mayor’s Bicentennial Committee to help plan Rahway’s celebration of our country’s 200th Anniversary. The meeting was to be held at the Rahway Yacht Club. Almost everyone responded they would attend or send a representative, but many asked, some with a touch of humor in their voice, “Where is the meeting really going to be held?” Even to community leaders, the Rahway Yacht Club, located at the foot of Patterson Street and overlooking the Rahway River, was one of the city’s best kept secrets.
In truth, the club was established 113 years ago in 1904 and is the 13th oldest yacht club in the state. The founding members were all prominent men in the community and included elected officials on the Common Council, directors of banks, Freeholders, businessmen, YMCA Directors, and Board of Education officials. The first Commodore was Gustav A. Vett, a successful New York City businessman. Original club bylaws state the object of the organization was, “To encourage its members to acquire knowledge of yacht sailing and motor boating.”
The Rahway River had always afforded Rahwayites a source of recreation long before the founding of the club. The allure of the river was exemplified on the evening of Saturday, September 19, 1891 when the city hosted a spectacular river carnival and aquatic fireworks display which attracted visitors from across the county and state. American flags and patriotic bunting lined the banks along the watery parade route. A festive atmosphere was further created by the thousands of lighted lanterns that were planted on the river banks and held by spectators. About 100 boats of every description, from simple, flat-bottomed, shallow draft boats to elegant steam yachts participated in the parade that started at the widest section of the river near the Hazelwood Avenue Bridge, and went as far as the Monroe Street Bridge, before turning back. Mayor William Chamberlain’s large schooner served as the headquarters for the committee and invited guests. Even Governor Leon Abbett sent his large motor boat “New Jersey” to be part of the parade. Perhaps events such as the aquatic carnival were the catalysts that aroused boating enthusiasts to form an official yacht club.
In the early years of the Yacht Club, fishing trips, regattas, opening and closing races and parties, and annual banquets filled the club’s schedule. In 1916, with World War I on the horizon, the club made a pledge of $3,000 to fund the building and equipping of a scout cruiser that would be placed at the disposal of the United States Navy in time of need. The scout boat would be used for night and day watch to give warning of any German vessels approaching the coast. They would also be used to protect allied commerce, to convoy merchant ships and transports, and to stop enemy or suspicious vessels. The scout boat was contracted to be forty-six feet by eight feet, powered by a 200 horse power engine, and equipped to carry two 3 inch guns. For their spirit of patriotism in their offer to have the craft built and placed under orders of the United States Government, the club received a letter of thanks and appreciation from the Secretary of the Navy, Josephus Daniels.
By the end of the 1920s, membership had rapidly grown and it became obvious that a new, more modern building with more space for social and business affairs was needed. Within a few years, a large addition was attached to the original clubhouse that included an assembly hall and reception room with a fireplace at the back end. An area was also added that included a larger locker room, shower stalls, and space for athletic equipment.
The club celebrated its 50th anniversary on Sunday, June 13, 1954. The highlight of the program was a flag presentation made by U.S. Coast Guard officials to the Rahway Yacht Club Flotilla No. 301, U.S. Coast Guard Auxiliary. The celebration concluded with a marine parade showcasing all of the visiting and local vessels followed by an evening social and dancing under the stars.
On July 4, 1976, the Yacht Club assisted the Coast Guard in traffic control in New York Harbor during Operation Sail, part of our nation’s observance of the Bicentennial of the United States.
Today, the Rahway Yacht Club maintains a strong membership and is the home port for 26 power boats. The annual schedule of events includes the Commodore’s Ball, Fluke Tournaments, Opening and Closing Celebrations, a mid-summer Dock Party, and their popular All-You-Can-Eat Breakfast offerings held every other Sunday from November to March. 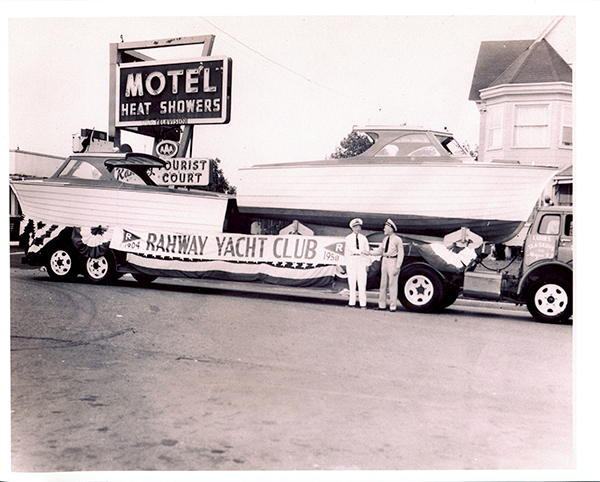 (above) Officers of the club pose next to the Yacht Club’s float entry in Rahway’s Centennial Parade held on July 5, 1958. 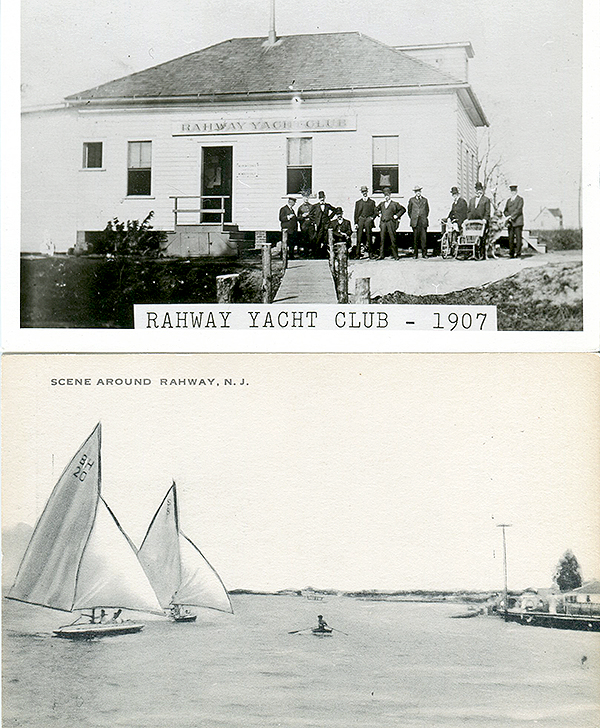