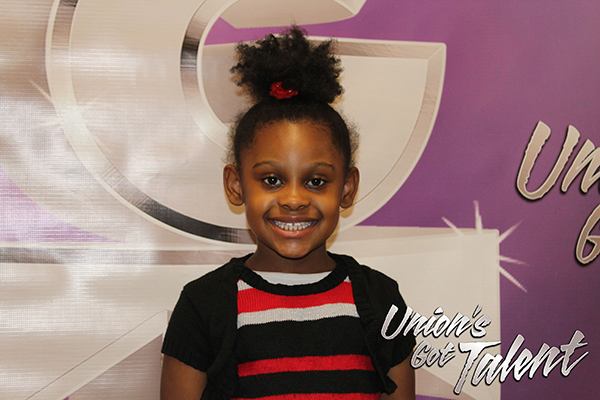 It was an evening filled with talent as 16 contestants took the stage, one of them a tiny six-year-old with a soaring voice who wowed over 200 spectators and a panel of prestigious judges on Saturday, October 5, 2019, at the 2019 Union’s Got Talent (UGT) held at Union High School.

Brianna Cameron, a 1st Grader at Battle Hill Elementary School, was remarkably disciplined as she performed “Greatest Love Of All” by Whitney Houston and sparked a standing ovation from the crowd. At the awards portion of the show, Brianna told UGT host Meridoc Burkhardt that she started singing at two years old and that “when she was a little girl she used to go on big stages like this,” winning the hearts of the crowd.

“Everyone did a wonderful job; I don’t envy the judges, they had to make a really tough choice picking the winners,” stated Marie Krueger-Canarelli, Union’s Got Talent show founder.

Finishing in second place and earning $500 was Khadija Sankoh, 16-year-old at Union High School, with her performance of “Quiet.”

Nikkita McKinnon, 16-year-old junior from Union High School, rapped to her original piece titled “To The Top”, was awarded the Youth Award, winning a $250 prize.

The People’s Choice Award winner – which was voted by the audience – was E. Spear, aka Blaze, who performed “Your My World” by Cilla Black, who also snagged a $250 prize. Every year, audience members are asked to participate as the 6th judge where they can vote for their favorite contestant by donating money into their perspective basket.

All proceeds raised from the event benefit the UHSPAC and DMK, two organizations that give back to the students of Union through scholarships and arts education.