Dan DiBella Posted in Our Publications, The Pride of North Plainfield 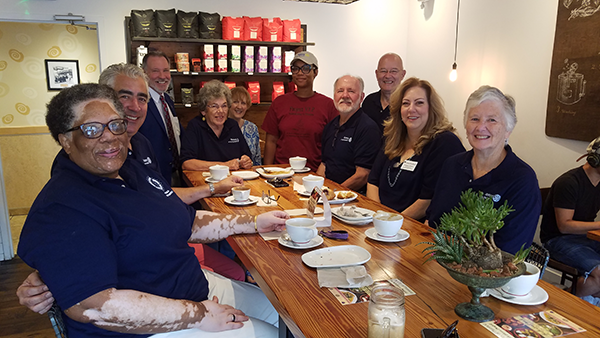 (above) Rotary District 7475 Governor Ray Freaney (third from left) poses with members of the Rotary Club of the Plainfields at The Coffee Box in Plainfield.

Ray Freaney, the Rotary District 7475 Governor for 2019-2020, enjoyed coffee and breakfast treats with the Rotary Club of the Plainfields at The Coffee Box in Plainfield recently. He met with ten members of the club, including its new president Shannon Jefferys, manager of Columbia Bank on Oak Tree Avenue in South Plainfield.

The district governor represents Rotary International and is the link between local clubs and the greater Rotary organization. One of the governor’s duties is to meet at least one each year with every club in his or her district.

Governor Freaney took a few minutes out of the Social Hour to go over his goals for the year, especially highlighting more cooperative ventures among clubs. He hopes that this will help the 82 clubs in the district to get to know each other and learn from each others’ projects and successes.

Rotary District 7475 stretches from Sussex County down through Mercer County, with the Rotary Club of the Plainfields just about in the middle of this area. The club represents North Plainfield, Plainfield, and South Plainfield.

For more information about the Rotary Club and how they serve the community, please contact the club secretary, Michael Townley, via email at secretary@rotarypnp.org, or visit their website at rotarypnp.org.