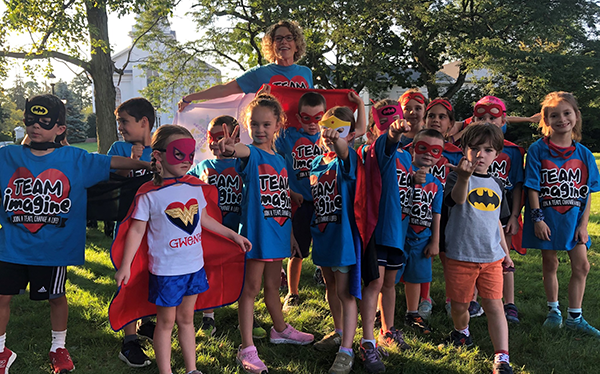 (above) In rear, Mary Robinson, CNN hero and founder and executive director of Imagine, A Center for Coping with Loss, holds her cape out in an embrace of Imagine’s wonderful team of children participating in the 18th Annual Westfield 5K & Pizza Extravaganza.

At this year’s Downtown Westfield 5K & Pizza Extravaganza held on July 24, 2019, Imagine, A Center For Coping with Loss, had a team of about 60 people, including approximately 20 children, who raised nearly $25,000 for the nonprofit. The event was B.Y.O.C.: Bring Your Own Cape, and all the kids wore superhero capes. The hero theme reflected Executive Director Mary Robinson’s nomination as a CNN Hero of the Year, but more importantly, highlighted a theme near and dear to Imagine – that all children can be the heroes of their own stories if they grow up in an environment that is open and supportive. Imagine’s goal is to be that place that supports children who have experienced traumatic loss – and to create communities that support children, listen to them, and let them know their grief matters.

“It was great to see the kids having so much fun while knowing they were raising money for an important cause,” said Mary Robinson, Imagine’s founder and executive director. “We’ve participated in the run for five years now, and all proceeds raised go to support the kids and families that participate in our grief support programs.” Following the event, the team was grateful to enjoy an after-party hosted and sponsored by Keller Williams on Elm Street in Westfield.

Imagine, A Center for coping with Loss, a not-for-profit 501(c)3 organization, provides year-round grief support for children and young adults using a peer-support group model. Trained adult volunteers and professionals provide children and teens with comfort and the tools needed to process grief resulting from death or life-altering illness. In addition to providing grief support at its two centers in Mountainside and Newark, Imagine provides education in the community, leading workshops and providing on-site support in schools and workplaces where traumatic loss has occurred. Groups, which meet on weeknights, serve children and adults from more than 55 New Jersey towns.

Tagged with: Imagine A Center For Coping with Loss, Westfield New Jersey