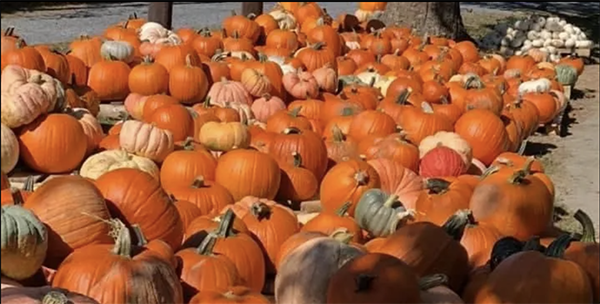 The historic Frazee farmstead will once again host the Great Pumpkin patch. Due to the pandemic, the annual Harvest Festival is cancelled this year but it will return in 2021! Pumpkins will be sold every day from 11 a.m. to dusk, from October 3rd through the 31st.  There will be various sizes and colors and the site will be decorated for Autumn.  It will also be an opportunity for the public to see the amazing progress on the external renovation of the Frazee House.  All proceeds from the sales of pumpkin sales will go toward the next phase of the renovation which will include restoration of the two lower levels of the western end of the house and one of the fireplaces, heating and air-conditioning, and the addition of a small public restroom.

The Frazee House, a nationally designated historic site, is significant for one woman’s rumored role in the American Revolution, and as an excellent example of 18th-century vernacular residential architecture. The house is reported to have been constructed circa 1720-1740 by the husband of Elizabeth (Betty) Frazee.

As the legend holds, after the Battle of Short Hills, General Cornwallis and his troops passed by the house while marching toward the Watchung mountains, located a few miles to the north. Known to the locals as a prolific baker, Aunt Betty was baking bread at the time. Hungry and tired, the troops smelled the bread and Cornwallis approached her stating, “I want the first loaf of bread that next comes from that oven.” Betty is said to have replied, “Sir, I give you this bread through fear, not in love.” Evidently impressed by her courage, Cornwallis is said to have stated, “Not a man in my command shall touch a single loaf.”

The Fanwood-Scotch Plains Rotary Club began the effort to restore the Frazee House approximately 15 years ago, working closely with the Township of Scotch Plains.  If all work is completed on schedule, the house will be open to the public in 2022.