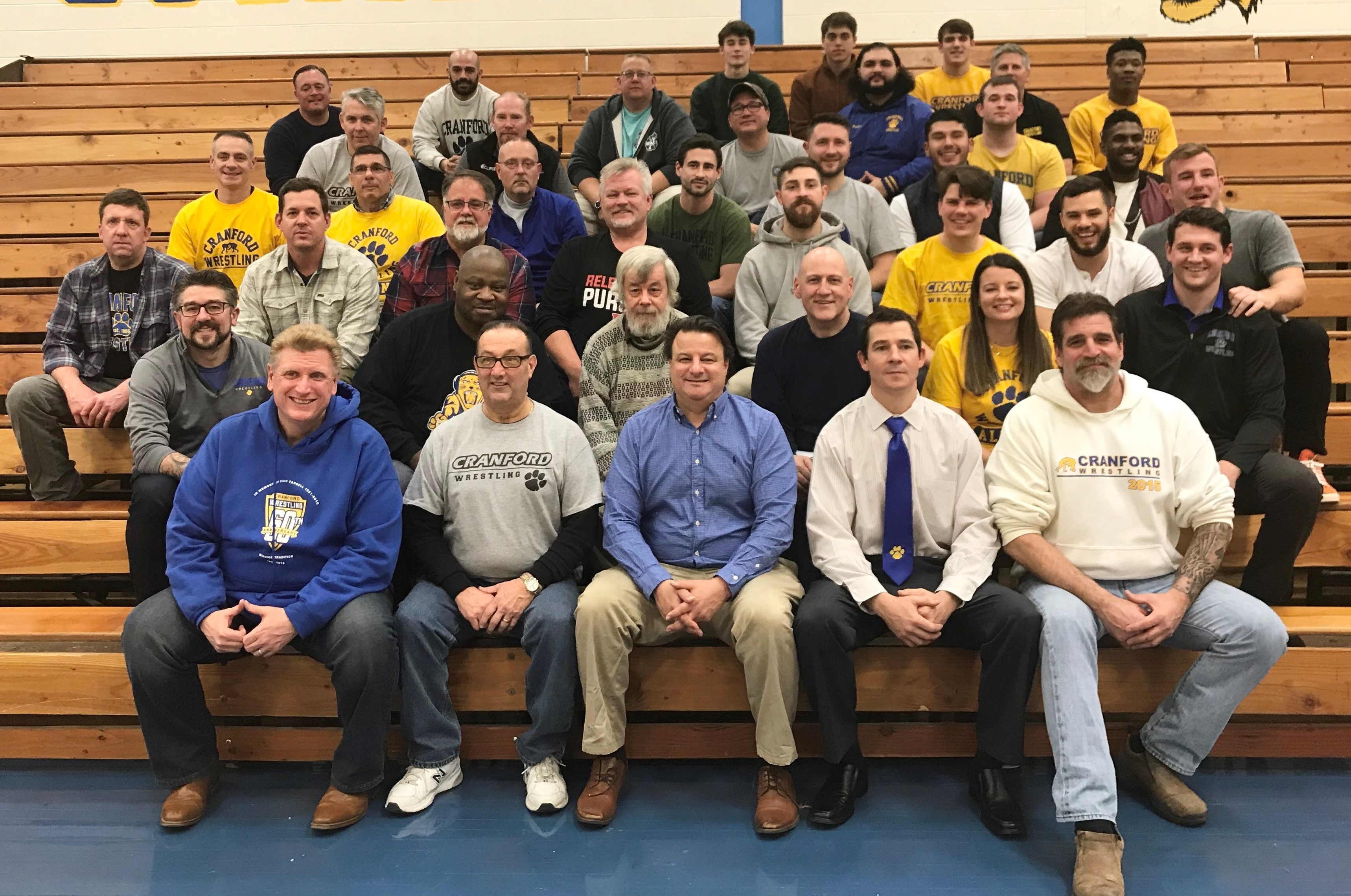 The Cranford Cougars’ 6th annual Wrestling Alumni Night was held on Friday, January 3, 2020. Cougar pride was displayed by the entire team that night. The Cougars were 6-0 following their alumni night win. Congratulations to head coach Pat Gorman and our entire coaching staff. We thank you for recognizing the alumni and for doing this every year for the brotherhood of Cougars!

Approximately 65 to 70 alums turned out on alumni night. Our oldest alumnus this year was Jimmy Farrell, son of the late great founder and legendary coach Herb Farrell. Jimmy earned his spot on his own accord, as a wrestler with the Cougars who graduated CHS Class of 1968, and as an assistant to his father for many years and interim coach when his father fell ill. He led out the Cougars Alumni procession with grace and dignity. As we lined the mats preparing for the varsity to take the mats, I commented to Jimmy that “I wish your dad was here to see this”. He smiled ear to ear and responded with his high pitched voice, “He would have loved this!”

Frank Genova was 2nd in line following Jimmy. Frank was captain of the 1985 and 1986 North Jersey Group 3 State Champs and 4th in the state in 1986 at 135. He was awarded alumni of the year at this year’s Annual Golf Outing and I told him then he would be leading us out! As we lined the mats the varsity came out to Johnny Cash’s version of “Sooner or Later God will Cut You Down” and walked out to our end of the mat. Each Cougar was greeted by every alumnus around the mat. The torch was passed to the Cougars of Today and they were told that this is their time….get it done!

Our youngest Cougars were 2019 graduates who wrestled for Cranford just last year. They were thrilled to be part of the alumni now. For all four years they got to experience what this magical night was all about, from the wrestlers perspective. The fact that so many who wrestled on the 2015-2019 teams make it back is a testimony to wrestling for our school and our town. They are welcomed in as brothers. Dean Smith, Kyell Roper, Jack Korzeneski were just 3 of the 2019 alumni who took part in the ceremony.

In remembrance we had Dana Marie Caruso, sister of the late William “Willie the Kid” Carpenter and Sam Cerrato, brother of the late Anthony “Nooch” Cerrato. We also had John Vicci who represents himself and son JT who was part of the first couple of alumni nights.

We never forget our Cougar family, it’s just that simple. Some of the guys I know that did not make the photo but were there were Dave Aldredge, Rob Buchannan and Ron Melao. Most importantly, they stayed for the majority of the match and that’s what it’s all about.

A huge welcome back to alum Scott Bonito who made it back for the first time. What a great surprise to see Errol Petgrave show up and see him back at the Dive afterwards! He was at the very first alumni match in 15 when we beat Park and it was great to see him at this one!

Thank you to all the Cranford Wrestling Alumni who was able to turn out for the 6th annual alumni nightevent.