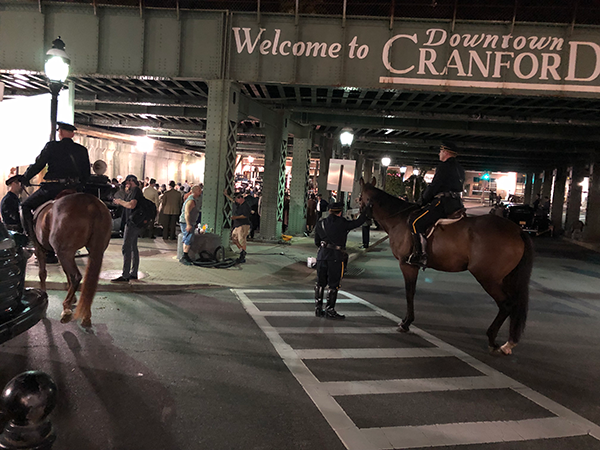 (above) Downtown Cranford was chosen to depict a New Jersey town which was the site of The Plot Against America, a forthcoming HBO mini-series based on a novel of the same name.

For two nights, towards the end of this summer, downtown Cranford was briefly teleported to the early 1940s for a fictional political rally. Cranford was chosen to depict a New Jersey town which was the site of The Plot Against America, a forthcoming HBO mini-series based on a novel of the same name. It offers an ‘alternative’ history whereby U.S. President Franklin D. Roosevelt loses a bid for re-election.

During the filming, Cranford streets were closed, storefronts were altered and crowds of onlookers caught glimpses of the set and actors. But for a lucky few from Cranford – including myself – we participated in the shoot. 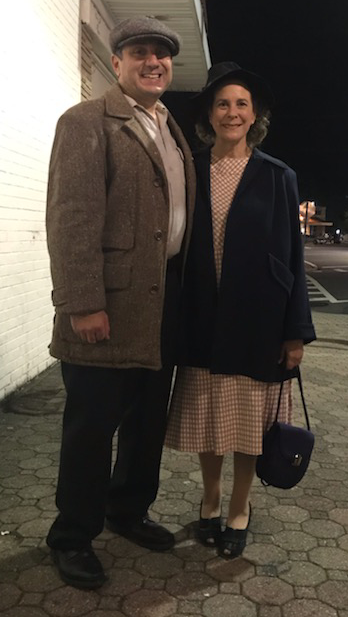 (above) Cranford residents Stu Rosenthal pictured here on Miln Street with his wife, Pam Brewster, during a break from the shoot.

Cranford is no stranger to commercial film productions, including Guess Who, Far From Heaven and Garden State. But it is doubtful these earlier productions cast many local performers, or actors who returned home for the shoot.

The casting company inquired about local talent, and even amateur actors. They contacted the CDC Theatre — Cranford’s preeminent theatre company which has been entertaining and developing local talent for over 100 years. The CDC forwarded the casting call email to its distribution list.

“When CDC contacted me about the opportunity, I immediately responded,” said Kelsey Kilpatrick, an acting student at Rider University who began performing at CDC at age 9. Kelsey intends to pursue acting full time after graduation next year.

While I am a proud patron and parent of young actors who got their start at CDC, I am not a professional actor. Beyond appearing in a few amateur films, including one for my son, I have no formal training. So when my wife, Pam, said that she submitted our names to the casting company, I hardly gave it much thought. As luck would have it, we were booked and directed to Queens for a wardrobe fitting a week before the shoot.

The Cranford Community Center closed early to the public on August 29th, and became the base of operations for the cast and some crew. Charter buses began arriving from Manhattan around 4:30 p.m., full of actors. Upon arrival, the Production Assistants navigated the cast from room-to-room for check-ins, wardrobe, hairstyling and makeup. By around 7 p.m., we were on our way to the set, located just under the train trestle on Eastman Street.

The Cranford site must have been carefully considered, with the picturesque Eastman Clock Plaza and manicured landscape used for background scenery. Perhaps one of the location scouts grew up here, or word had spread that Cranford has the best downtown in New Jersey, a title recently bestowed by NJ.com. Still, the rolling trains above the set interrupted filming at least once, and I wondered if any of the crew had reviewed a train schedule.

In order to resemble the early 1940s, some thoughtful modifications were required around the set. Most visible were the vintage vehicles parked along North Avenue and surrounding streets. Less obvious were the amended store signs, concealed parking meters and altered traffic signs. One also couldn’t miss the sight (or perhaps smell) of the horses involved in the scene.

Over 150 actors took part in the rally. Most of us were dressed in garb reminiscent of working class immigrants from the era. Yet, our hairstyles were fashionable. The ladies’ hair was fashioned with hair rolls and waves. The men’s hair was highly slicked, and sharply parted to the side. I never had so much goop in my hair before. Nevertheless, most of us donned headwear which obscured the retro hairstyles.

After rehearsal, we had dinner back at the Community Center before returning to the set by about 9:45 p.m. I was standing in the middle of the ‘rally,’ with Pam nearby. I was readying for a long night ahead when someone from the crew approached me. She led me through the crowd, toward the front of the stage. I thought maybe they had too many ‘extras’ and didn’t need me. Quite the contrary. She positioned me at the front of the crowd – the very first row – and introduced me to my new ‘wife’ with whom I would attend the rally.

In the front, I was surrounded by all of the crew operators, equipment and the general buzz of a major film shoot. Directly in front of me were the most expensive video cameras in the business, available only to the studios. Behind the temporary stage was a crane that would extend overhead to film the crowd. Nearby were portable video stations for coordinating with the camera operators. Next to me were the strobe lights, pointed at the stage.

The Director soon stepped onto the stage and welcomed everyone. He provided the background for the scene, set the mood and established the tempo for the shoot. (Sorry, no spoiler alerts here.) The Director then retreated to the sidewalk, next to the Dovetails antiques store, to his makeshift ‘cubicle.’ It was the nerve center of the shoot – a meet up spot for his Assistant Directors and senior crew members.

Traversing all around me were the cinematographer, boom (microphone) operator, art director, gaffer (lighting), hair/makeup, technicians, etc. But when the 1st Assistant Director came over to greet a regular on the set — my new wife character — I knew this was a coveted spot.

The Assistant Director took charge, guiding the crew and cast through the many takes that would follow. He preceded each take with a “picture is up” directive, or signal for everyone to get into position. This was followed by “ready, set, background, rolling,” and intermittent acknowledgements by the equipment operators. Finally, with the proverbial “action” command, I became an actor with no scripted lines. But I was in a ‘leading’ row.

We remained on our feet all night, with occasional breaks when they guided us away from the set toward North Ave. We wandered down Eastman, toward the post office and Miln Street. Pizzeria Bel Giardino, although not normally open for business at midnight, opened their dining area to the cast for seating. Between shoots, I chatted with the crew, cast and met other locals.

“Working on The Plot Against America in my hometown, Cranford, was an absolutely surreal experience,” said Chris Esmerado, a full time actor and CHS graduate who returned home for the shoot. “Among the many film and TV show sets that I’ve worked on – including Joker, The Marvelous Mrs. Maisel, and Gotham — The Plot Against America is one of the best and most professional.”

By about 2:30 a.m., filming wrapped and the cast returned to the Community Center. We exchanged wardrobes and checked-out. Most boarded the buses, and returned to Manhattan, only to arrive home just before sunrise. They would return to the set the next afternoon, after just a few hours of sleep.

By the second night of shooting, the crowd of Cranford onlookers grew. Word must have traveled. We were familiar, even comfortable with the scene by now. Or so we thought, until the stunt performers arrived. The Director was in the crowd for the early takes, and guided the stunt performers. It became the pinnacle of the scene, and was captured from numerous camera angles. The cinematographer was now in the crowd, filming the stunt performers. Ironically, he was also named Stu. I thought ‘how often are two guys named Stu on the same movie set — one behind the camera — and one in front?’

We concluded by about 3:30 am. I bid farewell to my new friends — non-local actors, mostly extras, who routinely shoot on location in many towns. But rarely, I was told, do the residents line the streets, to greet, applaud and take pictures of the actors, as they did in Cranford. I responded that this was a special event, and hosted in a special place.

The HBO film shoot was made possible by the Cranford Downtown Management Committee, the accommodating businesses and a very welcoming town.

“The Plot Against America is destined to be one of the great shows of 2020. I can’t wait until it airs,” said Chris.

Tri-County Chamber of Commerce meets every Monday morning at 8:00 am at the Holiday Inn at 36 Valley Rd, Clark, NJ 07066
12:15 pm Mountainside Rotary Club Lunch M... @ THE GRILLESTONE
Mountainside Rotary Club Lunch M... @ THE GRILLESTONE
Jan 25 @ 12:15 pm
MOUNTAINSIDE ROTARY CLUB LUNCH MEETING EVERY MONDAY at 12:15 pm AT THE GRILLESTONE on Route 22 W. New Members Welcome
Jan
26
Tue
2021
all-day Canceled Events Due to Coronavirus
Canceled Events Due to Coronavirus
Jan 26 all-day
The coronavirus has led to the cancellation or postponement of many public events, sometimes at the last minute. Renna Media is doing our best to stay on top of cancellations of events and removing them from our calendar. Please check with event promoters…
Read more ›
8:30 am Linden Chamber of Commerce Meeting
Linden Chamber of Commerce Meeting
Jan 26 @ 8:30 am – 10:00 am