Buried Treasure on the Banks of the Rahway River 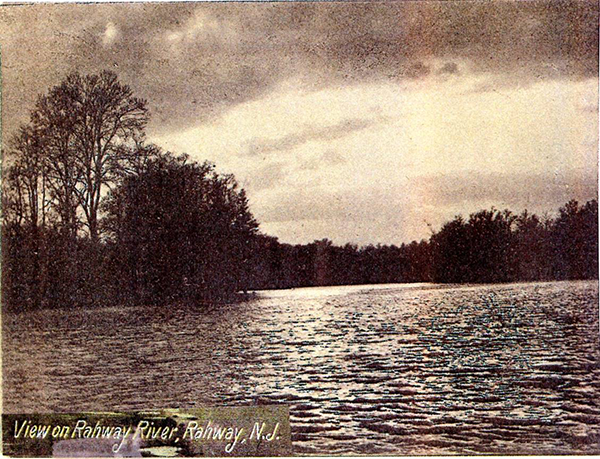 (above) The Rahway River as it might have looked on the night of our story.

Tales of buried treasure always pique the imagination and conjure up romantic images of swashbuckling pirates, chivalrous highwaymen, and rakish outlaws. When such stories refer to places that are close to home, fascination levels increase and dreams of uncovering oaken chests filled with gold and jewels can easily slip from fantasy to reality. One such story that became legendary by the 1800s and set many a treasure seeker digging along the banks of the Rahway River, was the legend of Captain Kidd’s buried treasure.

A story long lost in the archives of the Rahway Herald dated April 15, 1837, tells the intriguing tale of Captain Kidd who sometime between the years 1689 and 1695 sailed from New York across the Arthur Kill and down the Rahway River in search of a place to hide his ill-gotten wealth. The spot he eventually found was known as Price’s or Post’s Woods, a small piece of woodland located along the southern banks of the river midway between Rahway and the Sound. After bringing his ship as close to land as safety would allow, the anchor was dropped, and two small boats were lowered. Pirates were coming ashore.

Once on dry land, Kidd, along with several members of his crew, headed into the woods and stopped when they reached an oak tree of enormous height and girth. With a hand gesture given by the captain, three pirates, with spades in hand, began digging a pit. Once the excavation was complete, the crew went back to the boats to unload their cargo. When they returned to the tree, their arms were filled with bars of silver and gold and bags containing jewelry and precious stones. The men brought the valuables to the edge of the hole and getting another silent signal from the captain, dropped the riches to the bottom. The entire process was accomplished in complete silence without a word being spoken. The stillness, however, was shattered suddenly when a loud shot rang out. Kidd had drawn his pistol and fired on one of his men, who having been killed instantly, fell dead to the ground. Replacing the weapon in his belt, Kidd instructed the others to toss the lifeless body into the pit where it fell among the rich treasure. The hole was then filled with earth, leveled and patted down, and covered with leaves. The mission completed, the pirates left the scene as stealthily as they had come, returned to their ship, and sailed back into New York Harbor.

The incident just recorded might never have been told had it not been for the sharp eyes and curious nature of one local Lenape chieftain known as Ra-wa-rah who secretly witnessed the entire devilish episode. The legend maintains that on the evening of the same day, Chief Ra-Wa-Rah was returning to his village in a canoe filled with an abundant supply of fish he had caught earlier. By now it was dark and as he paddled toward friendly campfires his keen eyes spotted a light far down the river that appeared to float on the water. It was not long before he realized the light was from a ship and he was soon able to make out a skull and cross bones on a flag that waved gently in the moon-lit sky. The Indian decided to ascertain what was afoot and maneuvered the canoe ashore, always being cautious by remaining in the dark shadows. In an effort not to be seen, but to gain a vantage point from where he could see all, the Indian adroitly climbed a tall tree and sat quietly on a sturdy branch. As fate would have it, the tree was the very one under which the pirates would bury their booty. The Indian saw and heard everything.  When the nocturnal activity was over, Ra-Wa-Rah left his perch and returned to his village. Fearing he might anger the Great Spirit because of all the evil he saw, he kept the story a secret until the last days of his life. Finally, in his dying whispers he recalled many vivid details, but the chief never imparted the exact location in the woods nor did he make mention of the giant oak.

A good legend is made believable when there are facts that can be associated with the tale. Captain William Kidd (1645-1701) was one of history’s most notorious pirates. An infamous marauder, he made a career of attacking ships and commandeering their treasures. Between the years 1689 and 1695 Kidd spent time in New York and was by no means a stranger to this locality. In New York, he met and courted a wealthy socialite named Sarah Bradley, a young woman who before her eighteenth birthday had already been twice married. Kidd became Sarah’s third husband on May 16, 1691 and for the next decade both would be hunted by the law. Kidd was eventually captured in Boston, transported to London, and tried for piracy and murder. Found guilty, he was hanged on May 23, 1701. He went to his grave never giving information regarding where his treasures were hidden. Sarah was arrested on the suspicion she knew where to find her husband’s treasures. If she did know, she never let on. The amount of time she spent in jail is not certain, but she was released for lack of evidence. With her possessions restored, Sarah returned to New York where she managed to escape her past relationship with Kidd. In 1703 she married her fourth husband, a gentleman named Christopher Rousby, whose home was in Rahway. The pair had three children and Sarah, who lived until 1744, never left the area. Might she have stayed thinking that one day she would retrieve the captain’s treasure trove?

There’s another bit of factual information that must be mentioned before this account can be closed. It was from a derivation of the name of Chief Ra-Wa-Rah that the City of Rahway gets its name.

Rotary Club of Elizabeth The Rotary Club of Elizabeth meets every Wednesday at 12:15PM.     The Garden Restaurant    943 Magie Ave    Union, NJ 07083    (908) 558-0101     We are a service organization comprised of business professionals who work or live…
Read more ›
Dec
8
Thu
2022
7:47 am Madison Rotary Club Breakfast Me... @ YMCA
Madison Rotary Club Breakfast Me... @ YMCA
Dec 8 @ 7:47 am
The Rotary Club of Madison has an enthusiastic and engaged network of ordinary people doing extraordinary things to serve humanity in our local and global communities. You have your choice of two weekly meetings: Thursdays, 7:47 am breakfast at the…
Read more ›
View Calendar
Add
Top