In the Rahway Cemetery, not far back from the steady din of traffic emanating from St. Georges Avenue, one can find the grave of Ambo, a slave woman, who died on September 21, 1847. One of only a scant number of marked slave graves to be found in cemeteries throughout Union County, the inscription on Ambo’s stone gives insight into the harsh reality of slavery as it was practiced even here in New Jersey.  Her marker reads:

Ambo
Died September 21, 1847
Aged 100 years
Born of African parents
In the family of Abraham Terrill
She remained a faithful servant to him,
his children, and grand-children, until her death.

Slavery in New Jersey goes far back into the Colonial period, as early as the 1630s according to some sources, and becomes a firmly established system in 1664 after the English take control of the colony.  By 1704 there was a large enough slave population in the Jersey colony that it was deemed necessary to enact a so-called slave code which formally reduced the liberties of the enslaved. It should be noted that there was a lower percentage of slaves in the Rahway/Plainfield area largely on account of the presence of a substantial Quaker population whose members were staunch abolitionists.

In the two decades following the Revolutionary War, most northern states ended the practice of slavery within their borders. New Jersey, which by 1790 had a slave population of over 11,000, was the last northern state to abolish the institution, but it was not done without a cruel stipulation. In 1804, the state legislature passed “An Act for the Gradual Abolition of Slavery” which in actuality allowed slavery to continue well into the mid-nineteenth century. The statute provided that African Americans born to slave mothers after July 4, 1804 had to serve lengthy apprenticeships to the owners of their mothers.  Females would be freed upon reaching 21 years of age, and males upon reaching 25. Slaves born before the law was passed were considered indentured servants who were apprenticed for life.

In the case of Ambo, the law did nothing to change her situation. Having been born before the 1804 Act, she literally remained in servitude until her death in 1847. In fact, having been born sometime in the 1740s as a child of slaves, she was destined to be a slave her entire life.

The origin of Ambo’s name is not known for certain, but it could possibly come from Ambo Point (now Perth Amboy), a city that was a major port of entry for the importation of slaves. She was born into the family of Abraham Terrill, a prominent man in Rahway who owned the Terrill Tavern, a popular meeting place located just north of the Robinson Branch of the Rahway River on the west side of St. Georges Avenue. Following the death of Mr. Terrill and his wife Mary, Ambo became the property of their son Thomas.

Ambo’s duties in the Terrill home and inn would have been varied, but basically, she would best be described as a household domestic. If the legend be true that General George Washington stopped at the Terrill Tavern on his way through Rahway during the Revolutionary War, it is possible that Ambo might have seen the general and perhaps might have even served him.

The United States Census of 1840 lists the household of Sylvanie Terrill, wife of Thomas, to include a free Negro woman between the ages of 55 and 100. If this reference was to Ambo, and she was freed in her old age, it would have been very difficult for her to start a new, independent life. It is more probable that she stayed with the Terrill’s and continued serving the family she had known all her life.

Over the course of the three generations of working for the Terrills, Ambo’s grave marker suggests that she was truly perceived as a member of the family. In the eighteenth and nineteenth centuries (and to some degree to this day), cemetery plots were purchased as the final resting place for all members of the family where they would be together forever. Family plots were exclusively for the mortal remains of family members only. The fact that Ambo’s grave lies in the Terrill family plot amongst the Terrill relations, shows the strong relationship that must have been built between her and the Terrills. Also, the fact that a headstone was placed on her grave, a tribute almost never given to slaves, is another indication of the love and respect the family felt towards this special woman and family member named Ambo. 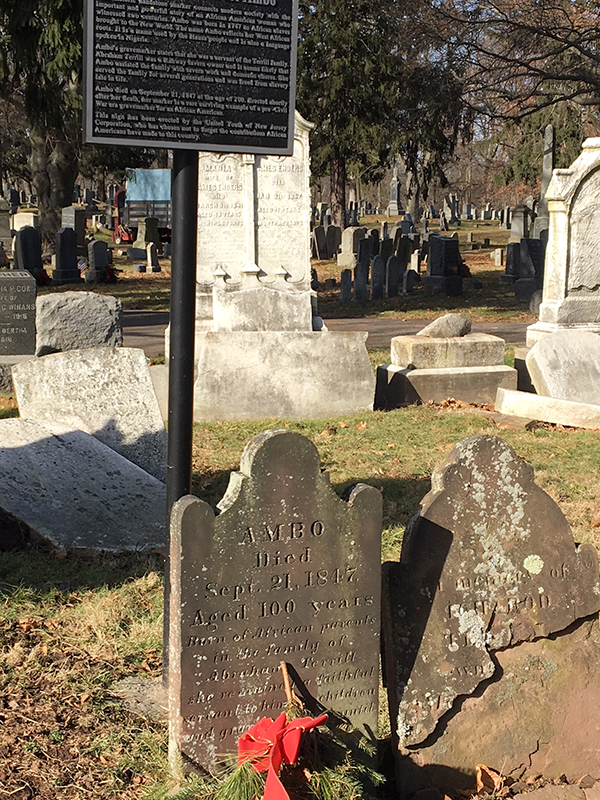 (above) Ambo’s grave in the Rahway Cemetery lies in the Terrill family plot. A permanent marker was placed at the site by members of the United Youth of New Jersey, a group based in Elizabeth, committed to preserving African-American history.