Submitted by: Rob Kinch
What could be more important to parents or guardians than the health, happiness, and success of their child? From the first day of their child’s journey through life, they are there to ensure that his or her needs be continually met, often putting their own needs on hold out of necessity. Skill development begins instantaneously for the child and, before too long, a first step is taken or a first word spoken (hopefully, it’s not “No!”). Of equal importance is the child’s intellectual development. “Is my child truly ready for the intense rigors of kindergarten?” “Shouldn’t he/she be successful at more sophisticated addition and subtraction?” Questions such as these frequently plague the minds of so many parents. It is here that Rahway’s educators are reassuring them, “We will see to it.”
At the heart of this promise is Rahway Superintendent of Schools, Dr. Patricia Camp, who places ensuring the grade level appropriate skill readiness of her youngest students high on her list of priorities. She is steadfast in her drive to see that “every child in Rahway is reading on or above grade level by the end of 3rd grade.” To that end, she envisions “universal preschool for every four year old in Rahway.” Why? As Dr. Camp explains, “An early start is absolutely the right thing to do because it’s critical for a child’s subsequent academic success.”
On August 1, 2017, School Districts throughout the State were notified by the New Jersey Department of Education of a funding opportunity in Preschool Education Expansion Aid (PEEA) for the 2017-2018 school year. Funded through the NJDOE Division of Early Childhood and Family Engagement, this grant would facilitate increased access to high-quality preschool programs within high-need communities. The basic requirements were that districts do one of two things: 1) if preschool is half day, then the classes must go to full day, or 2) if a district already offers full day preschool, it must offer it to more students.
Recognizing at once the invaluable educational opportunities this funding would provide to the preschoolers of her district, Dr. Camp immediately enlisted an administrative team to liaise with her to establish a goal, to create partnerships, and to generate a budget to ensure submission of a quality application for the rapidly approaching August 21 deadline. Members of the team included Assistant Superintendent of Instruction Dr. Debra Sheard, Program Supervisor of Literacy Ms. Tiffany Lynch-Beer, and Program Supervisor of Special Education and Early Childhood Education Ms. Barbra Pyne. Together the team agreed that they must do what they could to provide the highest quality preschool for the most children. It was then clearly apparent; there was no other choice but to propose fulfilling both requirements by transitioning to full-day AND by increasing student enrollment as well!
With support by the National Institute of Early Education Research (NIEER) at Rutgers University in writing the grant, the application and supporting documentation were finalized and approved by the Rahway Board of Education on August 22. On September 1, 2017, Rahway Public Schools was notified by the NJDOE that it had been approved for an initial award of over $2,700,000 in PEEA for the 2017-2018 school year. Board President, Ms. Lori Kennedy, proudly comments, “I would like to thank Dr. Camp, Dr. Sheard, Ms. Lynch-Beer, and Ms. Barbara Pyne and all the many others involved in writing the grant and then putting together a complicated program in such a short period of time, enabling this wonderful opportunity to become a reality.”
The Rahway School District currently offers a half day preschool program to 150 four-year-old children at four elementary schools. The PEEA grant will enable the district to expand its offerings to include full day preschool to four-year-olds free of charge. To that end, the district has added an additional classroom in each of its four elementary schools, as well as four additional classrooms in Rahway’s 7th and 8th Grade Academy, in a wing dedicated to preschool. With this expansion, Rahway schools can now provide full day preschool to 260 children. “This funding will benefit the youngest learners in Rahway,” affirms Asst. Superintendent Dr. Sheard. “It will set a trajectory of success for our little ones and set them on a clear path to level appropriate skill mastery.”
In an effort to maximize learning opportunities for the new little ‘full-timers’, the administrative team have focused themselves not just on meeting grant requirements but on surpassing them as well. Although PEEA requires that teachers be Preschool-3 certified and that paraprofessionals have a minimum of 60 college credits, many of Rahway’s new teachers possess dual certification (i.e., Elementary, Special Ed) and many of the paras have earned more than 60 college credits, with some holding BA/BS degrees. In addition, PEEA funded classrooms must achieve a 4.5 or higher rating by the ECERS (Early Childhood Educational Rating System) which delineates curriculum and environmental requirements that are age/developmentally appropriate for preschool. Rahway’s preschool classrooms will boast an ECERS level 7, the highest level. Moreover, two weeks of Professional Development was planned by the Supervisors and provided to the new teachers to bond as a team and to cover a wide range of topics from classic district orientation to hands-on teaching strategies.v
Principal of Madison Elementary School, Ms. Arina Robinson envisions the new full-day pre-k program as “an investment in our students.” She adds, “Quality early childhood education is critical to the enhancement of social-emotional skills, language and math skills, and the physical development of young children.” Also excited by the prospect of spending a full day in school just like ‘the big kids’ are the four-year-olds themselves, who had some pointedly insightful comments as well. Current Madison School pre-schooler Johann Bermudez exclaims, “I’m gonna get a happy stamp!” while Madison Roberts cheerfully offers, “I have shorts – I’m gonna wear them!” 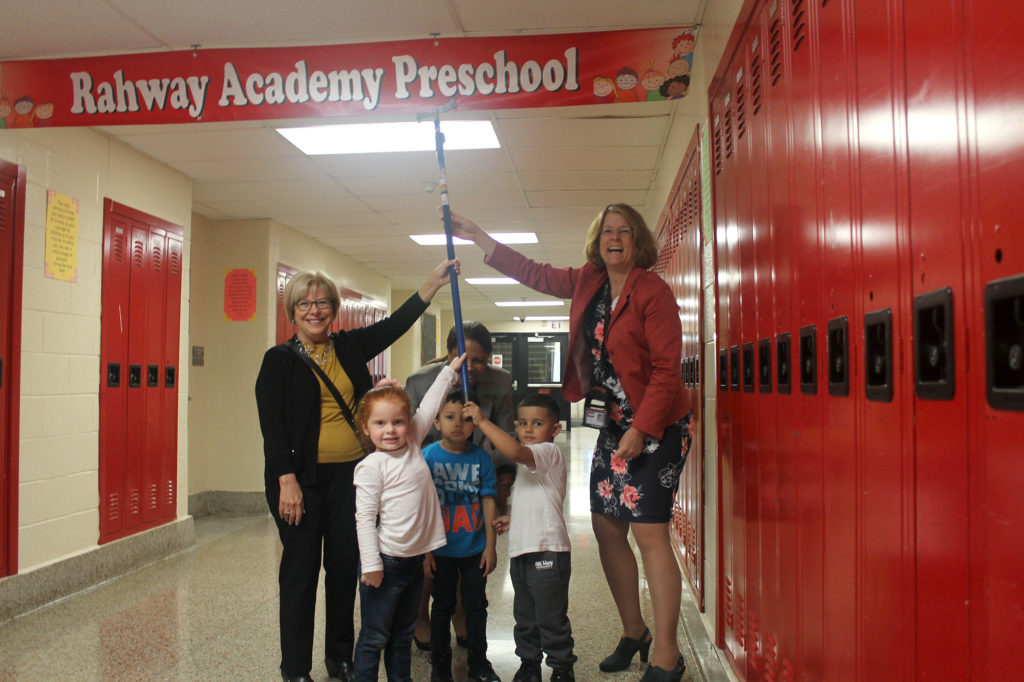 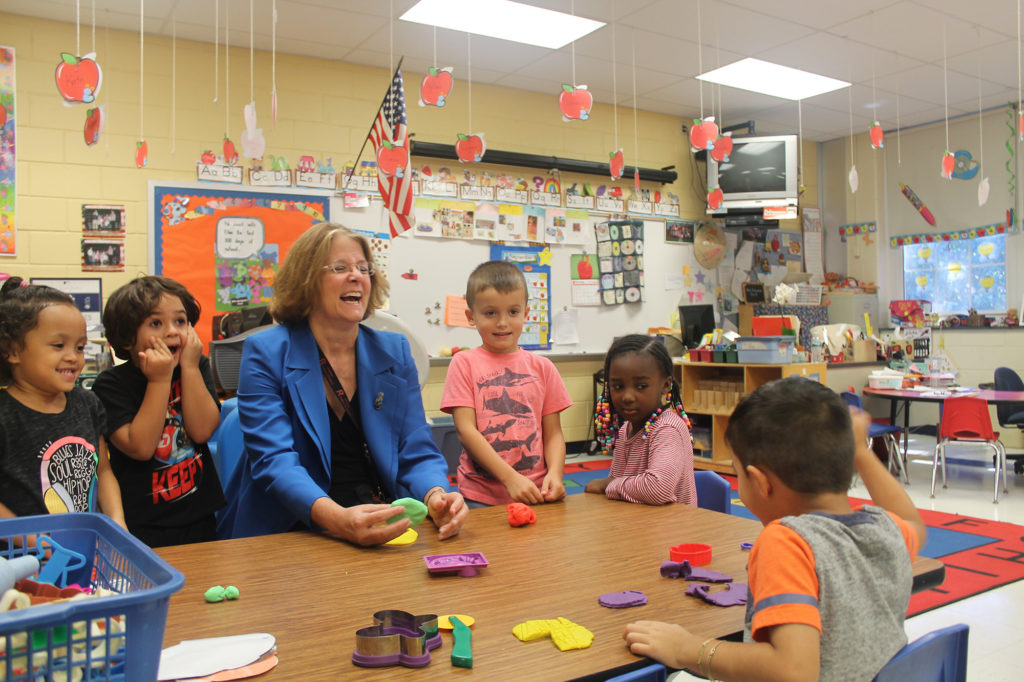 (above) Dr. Camp learns the road to discovery begins with Play-Doh. 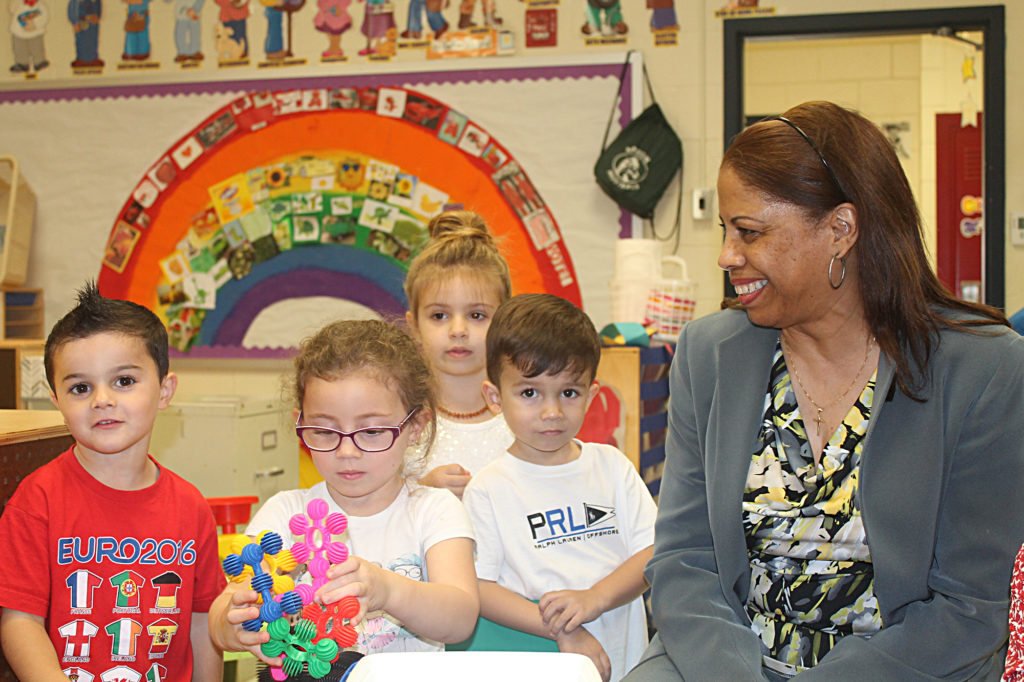