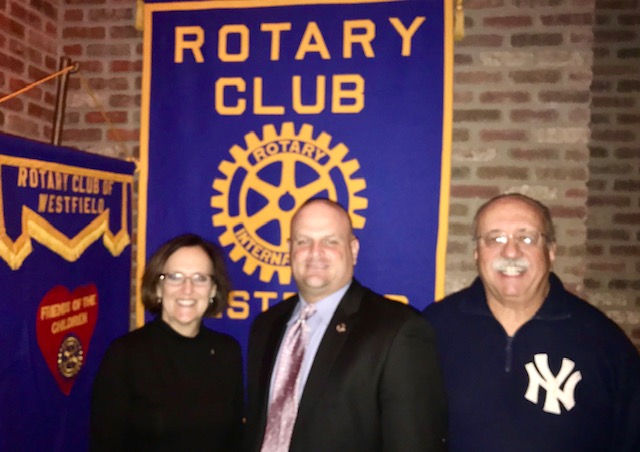 (above, l-r) Rotary Club President Liz Ensslin, Police Chief Christopher Battiloro, and Program Chair (and Yankees fan) Tony LaPorta. Tony is so dedicated that he missed a playoff game to come to the Rotary meeting.

Westfield Police Chief Christopher Battiloro recently spoke to the Rotary Club of Westfield. Rotarians and members of the community were in attendance. Chief Battiloro discussed the role of the Police Department in town, how to prevent crime, preparation for large events, his responsibilities, and his vision for the future.

The Chief grew up in Westfield, attended Westfield High School and Clemson University. His father was the Chief of the Westfield Fire Department and would not hire him, so he became a police officer. He worked his way up from dispatcher to patrolman to Sergeant to Chief.

Westfield has a population of approximately 30,000 people with 10,950 housing units and is increasing in population. The police department handles 46,000 calls per year for which some action needs to be taken. The Police Department has 79 employees with 61 sworn officers, and 40 vehicles, and a budget of 6.8 million dollars. Westfield has 52 locations which require crossing guards, and if the town is short of personnel, the police need to fill in.

Special event planning is a concern, especially after September 11th. Some of the events have 20,000 to 30,000 people in attendance. The Westfield Police make many behind the scenes preparations to keep us safe. The Chief is working on Accreditation to make the department more professional. He added body cameras to every police officer at no cost to the taxpayers through forfeited drug money. He has consulted with the FBI to train his department in active shooter situations. The Police plan to work with the Fire Department as a coordinated team in emergencies. Chief Battiloro feels it is important to recognize good work or life saving events, and recognizes his officers at the annual Awards Banquet. He is looking to increase diversity in the Police Department, which will give them greater abilities, including adding speakers of other languages. The High School and both Intermediate Schools have full time police officers present in the school all day, and the elementary schools are checked on at least twice a day.

Westfield was recognized as the 15th safest city in America, which the Chief feels is primarily due to proper policing. The most pressing crime in Westfield is car theft. Last year 30 cars were stolen in town, and every car was unlocked with the keys in the car. One car thief was released on bail, and had no way to get home to East Orange, so he was caught stealing another car! Another car thief entered a house on Hillside Ave, took the car keys off the kitchen table and stole one car. No one noticed, so he was back 20 minutes later, came into the house again, took the other keys and stole the other car. Lock the doors of your house!

The cities on either side of us- Newark, Elizabeth and Plainfield have gangs, open air drug markets, and 10 to 20 homicides per year. Westfield has not had a homicide for 19 years, since May 2000- which was a kidnapping and murder- suicide of two college students. The last homicide before that was 4 years earlier in March of 1996 when an estranged wife shot her ex in the Westfield Leader newspaper office. There are very few violent crimes in Westfield. Overall, it is a very safe town. Drugs are everywhere in America, and they are also in Westfield. Marijuana use is widespread. The police officers have used Narcan to save opioid overdose victims’ lives about 6 or 8 times per year.

Police Chief Battiloro says we live in a wonderful town, but be safe- do a “9 p.m. routine” – lock your cars and lock your house.

The Rotary Club of Westfield meets the first two Tuesdays of the month at Addams Tavern for lunch at 12:15 p.m. Guests are always welcome. For upcoming programs visit westfieldrotary.com or contact Dr. Michael Hart at drmhart@yahoo.com.