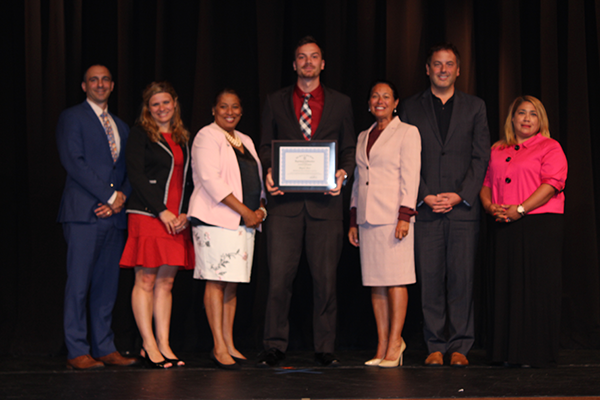 On August 14, 2019 the Department of Education (NJDOE) announced 21 teachers as the 2019-2020 County Teachers of the Year during an awards ceremony held at Liberty High School in Jackson.

Superintendent Edward Grande stated, “Bryan consistently displays the highest level of excellence in his work and interactions with students both within and outside of the classroom.  His hiring was on par with our school system winning the lottery and he could not be more well-deserving of this recognition.”

“It is with great pride that I recognize these highly skilled, compassionate and dedicated County Teachers of the Year,” said Governor Phil Murphy. “These teachers reflect the exemplary quality of educational leadership that we see throughout our state.”

“New Jersey’s educators are among the best in this country, as evidenced by the success of our students,” said Education Commissioner Lamont O. Repollet. “The teachers who we recognize today instruct, inform, and inspire children to achieve success in school and beyond.”

The Governor’s Educator of the Year Program promotes a positive school culture by acknowledging the hard work and dedication of outstanding teachers. Individual schools are encouraged to nominate exceptional educators with diverse backgrounds to ensure that the honorees represent the ethnic/racial diversity of New Jersey. As an added incentive to participate this year, the New Jersey School Boards Association made it possible for over 2,400 educators who were named as their local school’s educator of the year to receive free virtual educational resources that will benefit their students.

The County Teachers of the Year will network with educators throughout the state and serve as ambassadors for New Jersey’s public schools. Additional information can be found on the Governor’s Educator of the Year webpage.

A panel of educators then will select the New Jersey State Teacher of the Year based on written applications, video submissions, and interviews with the top six finalists.

The State Teacher of the Year is expected to be announced at the State Board of Education’s October meeting.

Tri-County Chamber of Commerce meets every Monday morning at 8:00 am at the Holiday Inn at 36 Valley Rd, Clark, NJ 07066
12:15 pm Mountainside Rotary Club Lunch M... @ THE GRILLESTONE
Mountainside Rotary Club Lunch M... @ THE GRILLESTONE
Jan 25 @ 12:15 pm
MOUNTAINSIDE ROTARY CLUB LUNCH MEETING EVERY MONDAY at 12:15 pm AT THE GRILLESTONE on Route 22 W. New Members Welcome
Jan
26
Tue
2021
all-day Canceled Events Due to Coronavirus
Canceled Events Due to Coronavirus
Jan 26 all-day
The coronavirus has led to the cancellation or postponement of many public events, sometimes at the last minute. Renna Media is doing our best to stay on top of cancellations of events and removing them from our calendar. Please check with event promoters…
Read more ›
8:30 am Linden Chamber of Commerce Meeting
Linden Chamber of Commerce Meeting
Jan 26 @ 8:30 am – 10:00 am