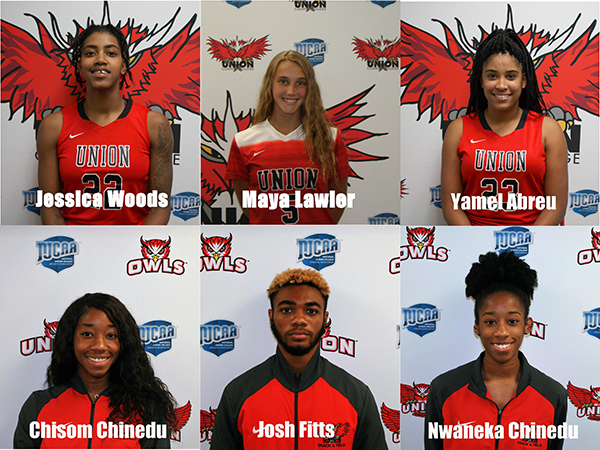 For the 2018-2019 academic year, Union County College had six student-athletes named All-Americans by the National Junior College Athletic Association (NJCAA). Yamel Abreu of Union, Chisom and Nwaneka Chinedu of Freehold, Josh Fitts of Roselle, Maya Lawler of Cranford, and Jessica Woods of Linden all had excellent performances in their respective sports to be named to an All-American team, the highest honor awarded to a student-athlete at a community college.

Yamel Abreu, a guard/forward on the women’s basketball team, had a spectacular second year. In addition to being named a First Team All-American, she was the NJCAA Region XIX Division II Player of the Year. She passed her 1000th point mark and averaged 16.7 points per game. She was also named Garden State Athletic Conference (GSAC) Player of the Year Award.

Josh Fitts was also a member of the Track and Field team and was named to the Second Team All-American in the 100m. He received an Honorable Mention placement for his 200m performance.

Maya Lawler, a defender on the women’s soccer team, was named a First Team All-American. For a second year she was also named the NJCAA Region XIX Division III Player of the Year. This past season she had 23 points with 10 goals and 3 assists. She helped bring the team to a national third place finish this year. Maya is the first player for a Union team to be named to an All-American team for two consecutive years. In 2017, she was named to the Second Team All-American.

Jessica Woods, a center for the women’s basketball team, joined Yamel and Maya as a First Team All-American. She grabbed her 500th career rebound and averaged a double-double with 14.3 points and 11.7 rebounds per game. For her excellent performance, she was also named to the All-Region Team as a First Team member and to the GSAC Division II All-GSAC team.

“Congratulations to our six All-American student-athletes. We are proud of your achievements,” stated Union’s President Dr. Margaret M. McMenamin. “By pursuing athletics at the collegiate level, these students have learned about leadership, time management, organizational skills, and how to handle success and adversity with grace and humility. Their experiences at Union County College will help them succeed after graduation in life and in their careers.”

For the 2019-2020 academic year, Union has added women’s bowling and men’s wrestling to its list of NJCAA teams. To learn more about Athletics at Union, go to unionowls.com.