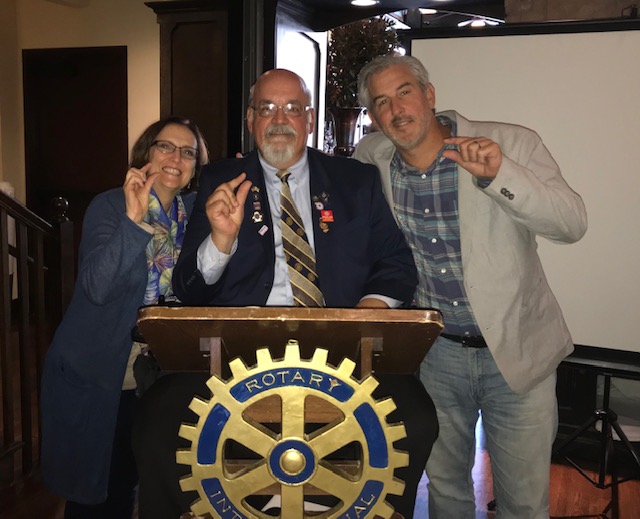 (above, l-r) At lectern, Club President Liz Ensslin; Speaker John Nanni; President Elect Joe Mindak. They are holding their fingers close because “we are this close to eradicating polio”.

Mr. John Nanni spoke about Rotary’s efforts to eradicate polio at The Rotary Club of Westfield Luncheon held on Tuesday, October 1, 2019. Mr Nanni is a polio survivor and suffers from “Post Polio Syndrome”.

As a child he was struck with polio 8 months before Salk developed his vaccine in 1955. Mr. Nanni was paralyzed from the neck down. He eventually regained the use of his muscles, recovered, played football in High School, got married and had kids, but after age 40, the muscles started to get weaker again. He is now mostly in a wheelchair. 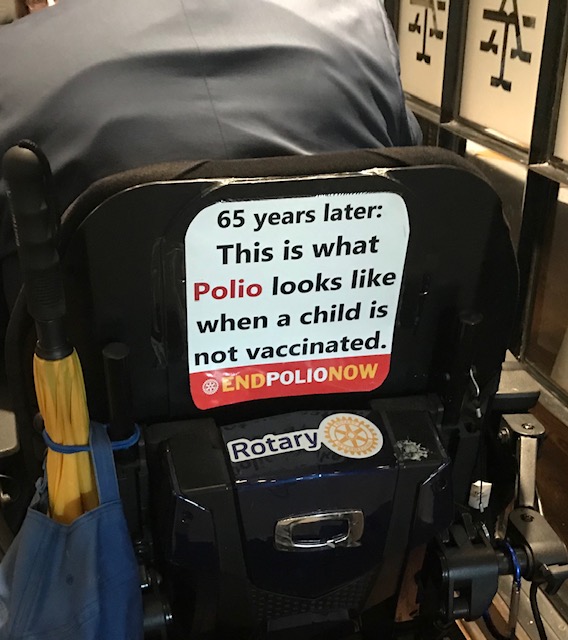 (above) The back of John Nani’s wheelchair, with a sign saying “65 years later this is what Polio looks like when a child is not vaccinated- Stop Polio Now”.

In 1985, Rotary International started a massive international campaign to eradicate polio. At that time, there were 350,000 new cases every year worldwide. After raising 3 billion dollars and immunizing billions of children, the disease is down to 82 cases in only two countries last year: Pakistan and Afghanistan. Rotary has reduced this disease by 99.9%. We are almost done.

This disease can only live in humans, and can be completely eradicated. There is no cure and no treatment for polio. It is highly contagious and can live for 2 weeks outside of the body, or in water. It mostly affects children under the age of five. Question: Since it is not prevalent in the United States, why do we need to immunize the rest of the world? With our world having transportation everywhere, and with tourists, students and immigrants traveling back and forth to the United States, we need to eradicate it, or it will come back and affect our children and grandchildren. Once we wipe it out, it will be gone forever. Only one other disease has been completely eradicated from the world: Smallpox.

Egyptian hieroglyphics show polio victims from 3,500 years ago, so this disease has been around for a long time. In the United States in the 1950’s there was panic every time there was an outbreak. Children were not allowed outside to play, swimming was forbidden, and Little League teams were disbanded. President FDR had polio which became much worse as he aged. Children were put in Iron Lungs to help them breathe, but their parents were not allowed to visit.

When Jonas Salk developed the vaccine, he refused to patent it. He wanted the vaccine to be available to the children of the world. He could have become a billionaire, but instead became a hero.

Rotary runs “National Immunization Days” (NID) where they shut down an entire country and vaccinate every child in one day. Recently there was an NID in India in which 32 million children were vaccinated by tens of thousands of Rotarians over one weekend. They stain the children’s pinkies purple to distinguish which children have received the vaccine, and they give out prizes to encourage children to come and receive it.

The Bill and Melinda Gates Foundation is focused on world health. They recognize the efficiency of vaccinations as opposed to the cost of treating a disease. They match Rotarian contributions at a rate of 2:1, so the funds are tripled. Each year Rotary International raises $50 million for polio, which is matched by Gates with $100 million. Over the past 3 years, we have put $450 million into this effort.

In addition to the vaccinations, Rotary has built a network of laboratories throughout the world. It is necessary to test and monitor people to know if the disease is reappearing. This infrastructure was used to help fight the Ebola Crisis in West Africa, and can be used to fight other diseases in the future. The program is called “Polio Plus” because we include the standard childhood vaccines in with the polio vaccine.

The Rotary Club of Westfield meets the first and second Tuesdays of the month at Addams Tavern in Westfield, NJ. Guests are always welcomed. Our website is westfieldrotary.com; for more information contact Club Secretary Dr. Michael Hart by email at drmhart@yahoo.com. 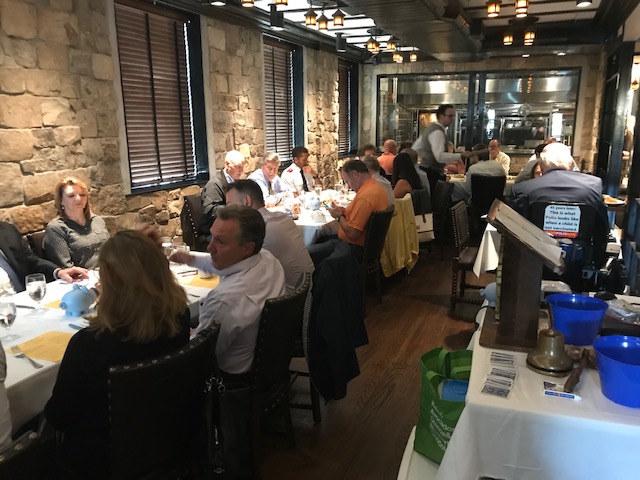 (above) Room of Rotarians having lunch.