The Rotary Club of the Plainfields Has a New Home

Dan DiBella Posted in Our Publications, The Pride of North Plainfield 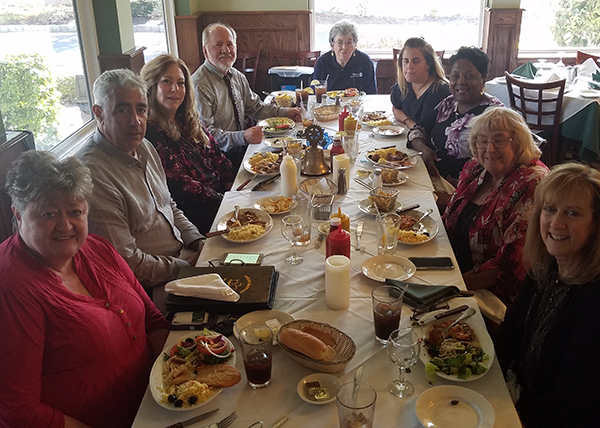 The Rotary Club of the Plainfields has settled into a new regular meeting place.

After trying out several restaurants in its service area of the three Plainfields, the club has selected Paulo’s Restaurant in South Plainfield for weekly meetings.

“We enjoyed all of the restaurants that we visited,” said Shannon Jefferys, club president and branch manager at South Plainfield’s Columbia Bank. “Each one had positive aspects, but Paulo’s was the overall choice of the members for its accessible dining room, service, and food offerings.”

The Rotary Club met for many years at Giovanna’s Restaurant in Plainfield, which closed recently after the property was sold to a developer of a Wawa gas station and convenience store.

Eugene Mitchell, who is president-elect of the club and the membership chair, pointed to the club’s recent expansion into South Plainfield as a contributing factor to the decision. “We want to be the club that services all three Plainfield communities,” said Mr. Mitchell. “Our club has held many meetings and projects in Plainfield and in North Plainfield over the years. We want to develop the same relationship with South Plainfield and encourage business and community leaders to join us in that mission.”

The club meets every Wednesday at 12:15 p.m. at Paulo’s Restaurant, 2341 Plainfield Avenue in South Plainfield, except the first Wednesday of the month when they hold a Social Hour at 8:30 a.m. at The Coffee Box, 1359 South Avenue in Plainfield.

Anyone with interest in helping others may attend any of the above meetings to learn more about the Rotary Club and how they serve the community. Contact the club secretary, Michael Townley, via email at secretary@rotarypnp.org for more information, or visit their website at rotarypnp.org.