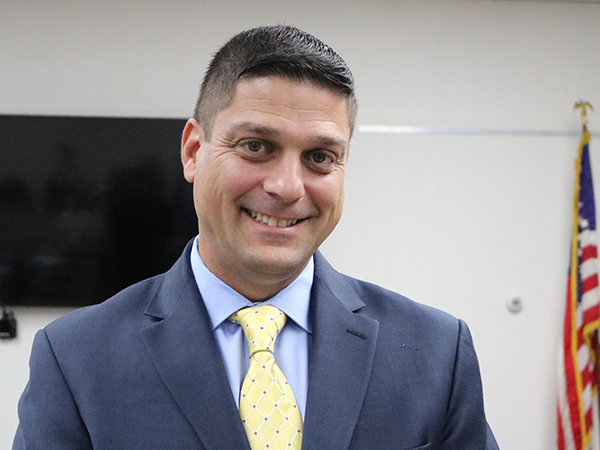 (above) At its public meeting on July 18, the Westfield Board of Education unanimously approved the appointment of Brian Gechtman as principal of Roosevelt Intermediate School, effective August 1, 2019.

At its public meeting on July 18, 2019, the Westfield Board of Education unanimously approved the appointment of Brian Gechtman as principal of Roosevelt Intermediate School (RIS), effective August 1, 2019. Gechtman previously served as assistant principal at Roosevelt. He succeeds Mary Asfendis, who began her new position as principal of Westfield High School on August 1.

“Reflecting on my seven years in what I truly believe is the greatest school in the greatest school system, I am so proud to represent this district,” Gechtman said in remarks following his appointment. “Every opportunity I get, you will hear me say, ‘There is no place I’d rather be.’”

Gechtman joined Westfield Public Schools in July 2012 as assistant principal of RIS where, among many responsibilities, he served as an instructional supervisor, observing and evaluating academic departments and the school’s paraprofessionals. As facilitator of Roosevelt’s technology committee, Gechtman assisted teachers in developing innovative ways to infuse technology into classroom lessons and worked with the school leadership committee to implement an initiative in Social and Emotional Learning (SEL). He also planned and facilitated staff professional development, safety and security drills, and the testing schedule for the New Jersey Student Learning Assessments (NJSLA) for grades 6-8.

“Mr. Gechtman is an educational leader with an impressive depth of knowledge of middle school students, social and emotional learning, and instructional practice,” said Superintendent of Schools Dr. Margaret Dolan. “His passion for character education in every facet of a middle school student’s education and his strong support of students with special needs also set him apart from the other qualified candidates.”

Additionally, Gechtman coordinated the Teddy Roosevelt Scholar and Independent Study Programs, a year-long independent study project in which more than 30 eighth graders participated last year. During his seven years at RIS, he served on a variety of committees including emergency preparedness, instructional council, and professional development, as well as a liaison to the Juvenile Officers Association. Gechtman also worked with a special education team, developing a tiered system of intervention to assist students in literacy and mathematics. Prior to arriving in Westfield, Gechtman was a middle school social studies teacher in Union for 12 years.

“As assistant principal, Mr. Gechtman is well-respected by the Roosevelt community,” Dolan added. “I am confident that he will bring the same level of energy, team-building, compassion, and leadership to his new role as principal of RIS.”

In addition to Dr. Dolan and Human Resources Specialist Barbara Ball, the interview committee for the Roosevelt Intermediate School principal position included a Roosevelt teacher and a counselor, the Edison assistant principal, a co-president of the school’s Parent Teacher Organization (PTO), two district supervisors, and a Board member. The comprehensive process also included an invitation to Roosevelt staff to contribute their thoughts on the attributes they would like to see in Roosevelt’s next principal as well as conversations with Mrs. Asfendis and the school’s head secretary and custodian.

“As I prepare to be the next principal of Roosevelt School, I look forward to the administration and teachers continuing our rich conversations and amazing collaboration with our colleagues at Edison Intermediate School, as all of our students share similar experiences throughout their middle school years,” said Gechtman. “I also look forward to continuing the district’s goal of Social and Emotional Learning. Infusing these lifelong lessons into our daily curriculum, as well as our Advisory Program, will allow our students to prepare for all future challenges.”