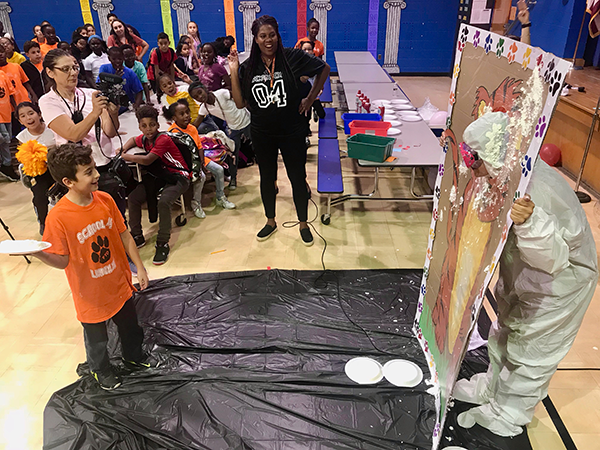 (above) Students were chosen at random from each grade level to try hitting School No. 4 Principal Suzanne Olivero with a whipped cream pie.

School No. 4 Principal Suzanne Olivero took it on the chin for her students on September 20. And in the eyes, on the cheeks, in the hair…

Students were allowed to take shots at their principal during the “Pie the Principal” fundraiser, lining up to throw pies – actually Styrofoam plates of whipped cream – at Olivero.

The event raised $250 for the school’s Positive Behavior Support in Schools (PBSIS) program, which rewards the students for good behavior and helps develop a family atmosphere at the school.

“Although the main objective of the fundraiser was to raise funds to update the game room,” Olivero said, “I thought this would be a good way of showing the entire school community that I am 100 percent vested in the success of our students, and I am willing to do whatever it takes to ensure their overall success.”

Olivero was protected by a plastic jump suit and goggles, but was nevertheless coated with whipped cream at the end of each of two sessions. The event was held in the school cafeteria on top of plastic tarps.

“Everyone from the students to the staff had a great time,” Olivero said. “I think this event allowed for all to see me in a different, less serious light.”

Before the main event, students learned about the PBSIS program. Staff members give out what the school calls “Victory Vouchers” to children for good behavior. The vouchers can be cashed in for trips to the school’s game room or for items in the school store.

The students learned about the Six Pillars of Character on which the PBSIS program is based: trustworthiness, respect, responsibility, fairness, caring and citizenship. These traits will be reinforced throughout the school year at PBSIS events and in everyday lessons.

The school also created a “Buddy Bench” as part of the program. The Buddy Bench sits near the school playground, and students who are feeling lonely or need a playmate can sit on the bench to let other children know to invite them to play.

“Students are eager to exhibit good behavior and character, and reap the rewards associated with that,” Olivero said. “I want the excitement to continue, and for all students and staff to put their best foot forward to ensure we have an amazing school year.” 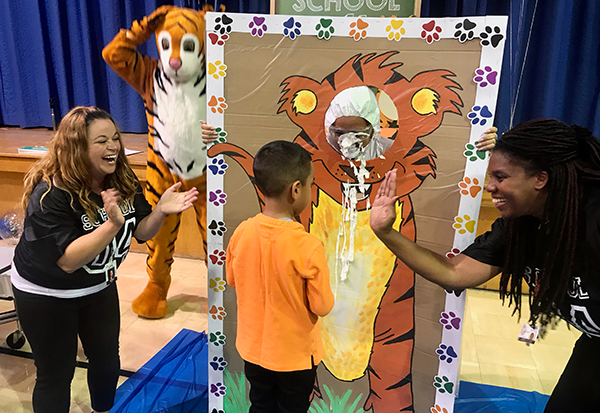 (above) School No. 4 staff members Jennifer D’Alessio and Laura Brunton celebrate after a student hits Principal Suzanne Olivero with her first pie. 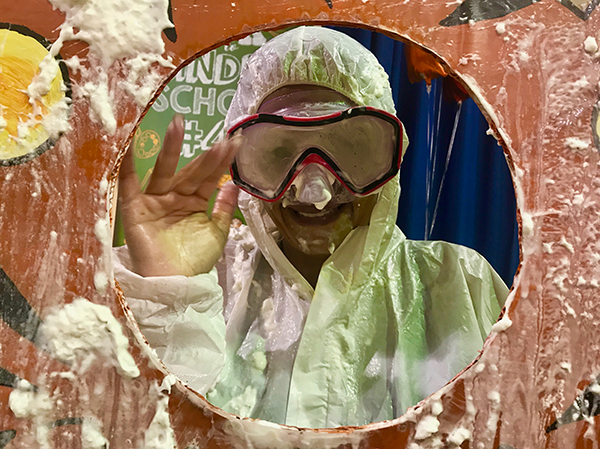 (above) Suzanne Olivero, principal of School No. 4 in Linden, waving after being hit by multiple whipped cream pies in the school’s “Pie the Principal” fundraiser. 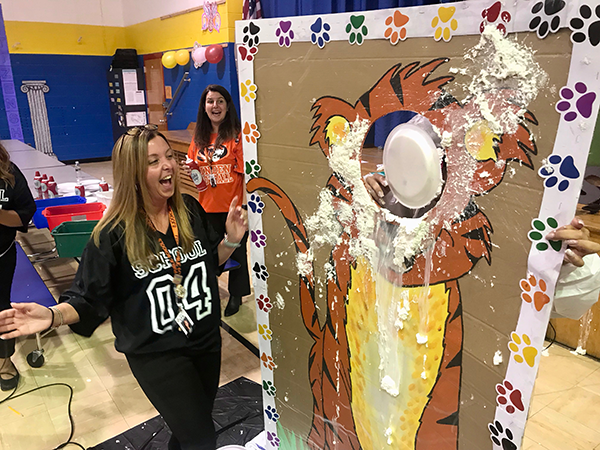 (above) Linden School No. 4 teacher Danielle Piscino laughing after hitting Principal Suzanne Olivero in her face with a pie during “Pie the Principal.”