On 75th Anniversary of VJ Day, Morris County Releases Document with Names of Our 3,075 WWII Veterans 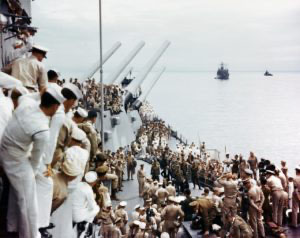 (above) Crew of USS Missouri watches the ceremony of the Surrender of Japan – VJ Day – September 2, 1945.

Submitted by County of Morris

World War II Ended on VJ Day with Surrender of Empire of Japan.

More than 3,000 Morris County residents participated in World War II by the time it finally ended 75 years ago, on September 2, 1945.

The Empire of Japan signed the formal surrender on board the battleship U.S.S. Missouri in Tokyo Bay. The day is known as Victory Over Japan Day or VJ Day.

In honor of the 75th anniversary of the official end of World War II, Morris County Office of Planning and Preservation released a list of 3,075 Morris County Veterans who served, from Pearl Harbor to VJ Day. The voluminous document, compiled by Cultural and Historic Resources Specialist Jan Williams, lists hometowns, medals, photos and other details.

Research materials were gathered from an exhaustive search of 20 major contributors such as local historical societies and cemetery associations, military archives, major museums, and Pearl Harbor’s Naval Command and National Park Service. More than 20 families have contributed information on their loved ones. You are invited to submit details of your family members. Additions and corrections are encouraged for this historical document.

In all, 407,000 Americans lost their lives in World War II, and New Jersey suffered more than 10,000 casualties – both wounded and killed.

United States involvement with the war began on December 7, 1941, with the air assault on Pearl Harbor, Hawaii, which was launched by the Japanese Empire.

Morris County resident and Naval officer, William Thompson of Mountain Lakes, would be killed onboard the Oklahoma BB-37. Joseph Coccia of Hanover who was in the Army and stationed at Hickam Field at Pearl Harbor would survive the Japanese plane strafes. William Minton Hummer from Dover was a student at the University of Hawaii and – somehow – made his way back to the mainland to enlist in the Army Air Corps. 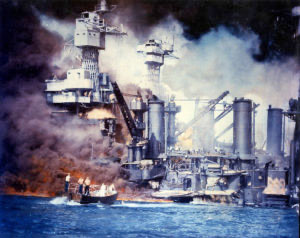 (above) Sailors in a small boat make a water rescue while an enormous ship burns in the background.

On December 8, the United States formally entered a war that had raged since 1939; becoming a key factor within the Allied Forces – joining with Great Britain, France, China and the Soviet Union to defeat the Axis forces of Germany, Italy and Japan.

Thousands of Morris County men and women would enlist in the services, engaged in a conflict that lasted five years. Many of Morris County’s service men and women returned victorious to a grateful nation to be embraced by those who fought the war at home. The personal histories written here are a microcosm of what Americans endured throughout the country.

Peter Chipko from Rockaway was a teenager when he volunteered to help with clean-up efforts at Pearl Harbor and enlisted in the Navy while there. Le Roy Boutillette would quit Morristown High School to enlist, likewise Adam Chlodnicki would leave Rockaway High School. Alma English of Dover, Lena Brown of Rockaway Township and Helen Olsen of Boonton enlisted as WACs; Mary Ann Fabro of Morristown and Evelyn Walsh Grimm, Morris Plains served as WAVES, Bernice Haydu, Florham Park, served as a WASP and Dover’s Dorothy Ennis served in the Marines. Morris County suffered losses at Leyte Gulf, Iwo Jima, Guadalcanal and D-Day.

We lost men on board The Juneau, The Indianapolis and various air and sea engagements. We had a bitter share of those taken prisoner and those who fates remain unknown to this day. We had “Monuments Men”, “Tuskegee Airmen” and “Montford Point Marines,” WACS, WAVES, WASPS and SPARS. The county had liberators of Dachau Concentration Camp and the Philippine Islands.

To view the document, visit: planning.morriscountynj.gov/survey/wwii/ This list is lengthy. For searching, hold down the ctrl key and the letter F key. A search box will appear. Type in a key word or name to locate the information.

For additions or corrections for veterans born in Morris County or who have lived in the county for ten years, please contact Jan Williams atjwilliams@co.morris.nj.us. 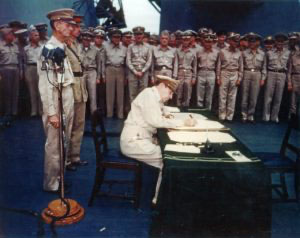 (above) Aboard the Missouri, Supreme Commander of Allied Forces Army Gen. Douglas MacArthur signed the Instrument of Surrender for the United Nations.