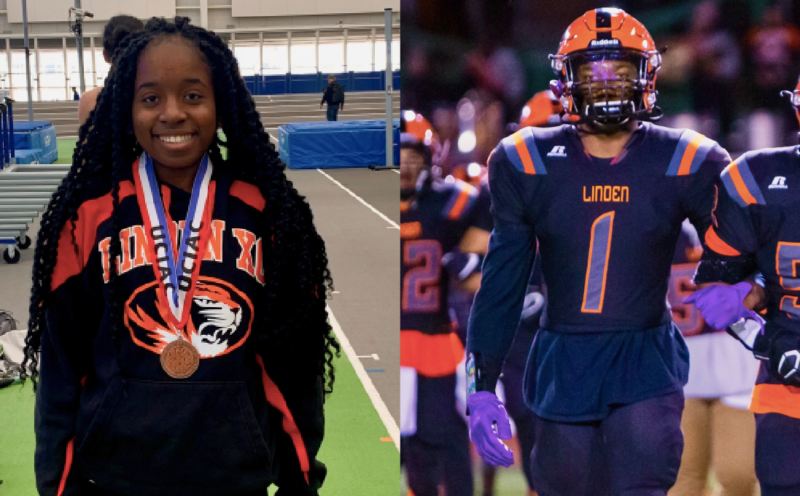 Two Linden High School senior athletes are being honored for their excellence on the field of play and in the classroom.

Chisom Uzor, a standout high-jumper and sprinter on the girls track and field team who is ranked No. 3 in the Class of 2020, has been chosen as a scholar athlete of the year by the New Jersey State Interscholastic Athletic Association as well as the Union County Athletic Conference.

Dami Awoyinfa, a dominant defensive end on the football team who is in the Top 5 percent of the class, is being honored as a male scholar athlete of the year by the Union County Athletic Conference.

“We couldn’t ask for two better representatives of our Athletic Department and our district,” said Athletic Director Steven Viana. “Dami and Chisom are the very definition of a student-athlete, as well as fine young adults. They have accomplished so much at Linden High School and will surely carry that success on to college and through the rest of their lives.”

Each is being awarded a scholarship of at least $1,000 for their honor from the Union County Athletic Conference. 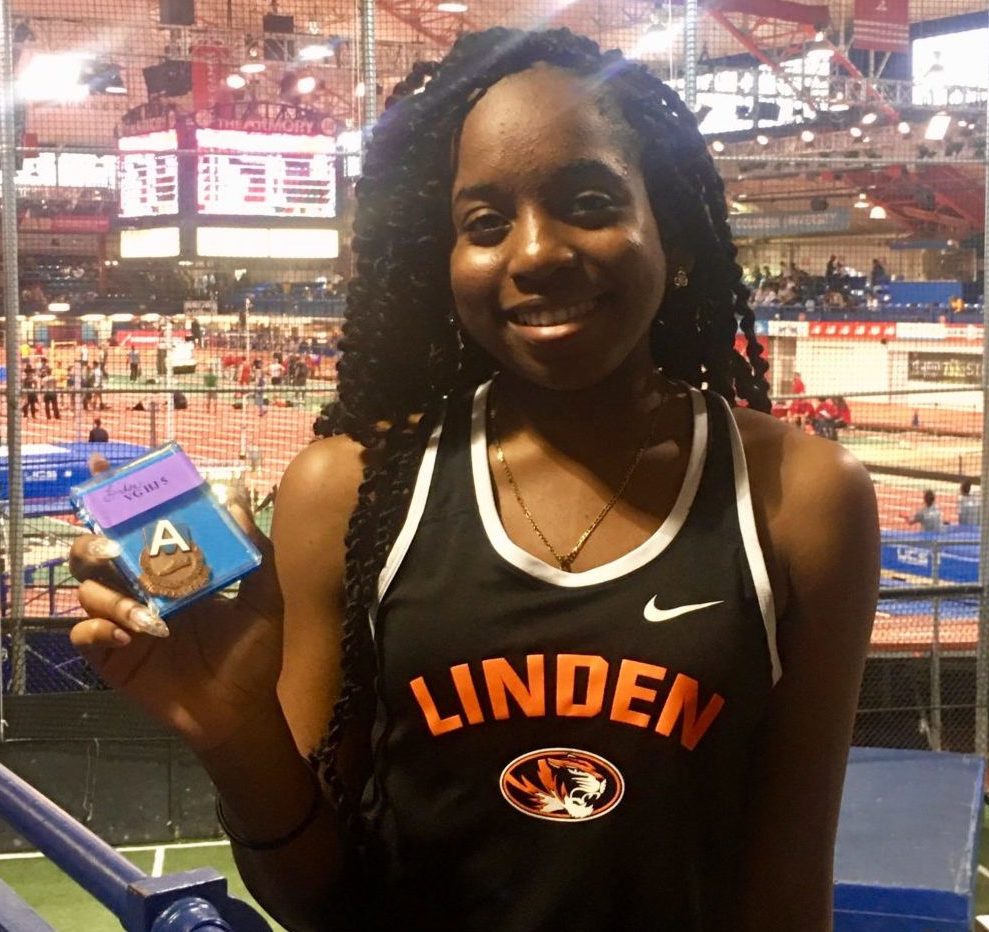 (above) Chisom Uzor, a standout high jumper for the Linden High School track and field team, will attend Georgia State University on a full academic scholarship.

“Chisom is a very talented, athletic and intelligent student athlete that is a pleasure to coach,” said girls track coach Leon Devero. “We are going to truly miss her for her hard work and great personality. She is a tremendous example for all of our young student-athletes.”

Uzor has accepted a full academic scholarship to Georgia State University, where she plans to major in nursing. She hopes to one day go to medical school to become a trauma surgeon.

Girls and boys assistant track coach Michael Firestone, who works closely with the high jumpers, said Uzor represents everything a coach could ever want from an athlete.

“She leads by example and does not shy away from the competition,” he said. “Words cannot describe how thankful I am to have been given the opportunity to coach her these last four years. She has a bright future and will be successful in anything she chooses to put her mind to. I will miss her dearly.”

“I cannot say enough wonderful things about her,” Vasquez said. “Her contagious and perpetual smile coupled with her personable character are both comforting and welcoming. She is not only dedicated to her academics but is actively involved in the diverse activities offered at our school. What separates Chisom from her peers is her aspiration for self-growth. She is an erudite, intelligent, and responsible student. Chisom is a natural born leader with unlimited potential.”

Considering her athletic prowess, it is not surprising that Uzor’s favorite class at LHS was Sports, Exercise, and Health Science, which is part of the International Baccalaureate program, the school’s most rigorous and challenging course of study.

“From my experiences in the IB program, I learned what it was like to challenge myself and work hard towards a goal,” she said. “I definitely believe that all my IB classes will give me an upper hand in college because of the prior knowledge that I will have already walking into the class.”

Her hard work translated to the track team as well, which she said was just as important to her as her classwork. She intends to continue with track at Georgia State as a walk-on.

“Running track was a way to release the everyday stress that was accumulated throughout the day from school for me,” she said. “Track also allowed me to form close relationships and bonds with not only my teammates but also with my coaches. I intend to remain close after high school especially since I have younger siblings who also have intentions of committing to Linden’s track program.” 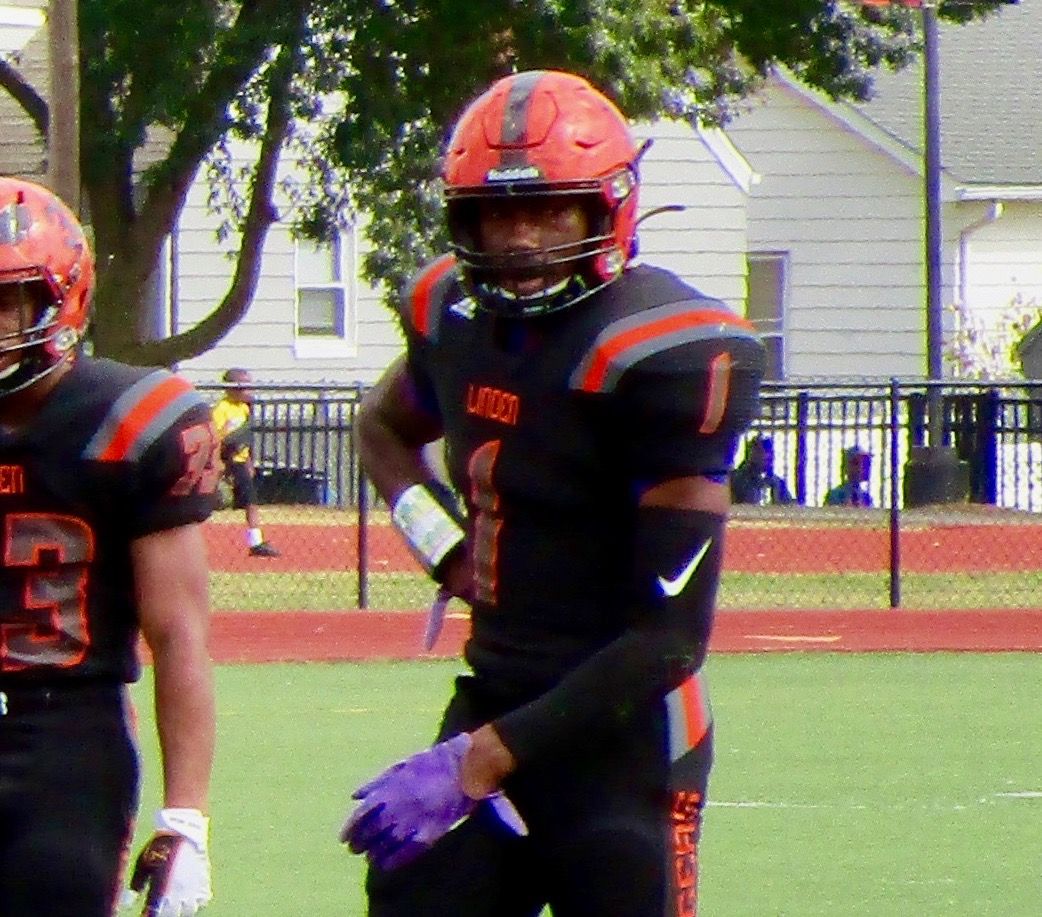 (above) Dami Awoyinfa, a defensive end for the Linden High School football team, has been selected as an outstanding scholar athlete by the Union County Athletic Conference and will join the Rutgers University football team in the fall.

Dami Awoyinfa was on the football team for four years, as well as the spring track team for three years, winter track for one, and basketball for one.

“Dami made our job as coaches easy,” said head football coach Al Chiola. “He was a dominant force every time he stepped on the field. Although he made it look easy, he worked very hard in the off-season to perfect his craft. Dami takes pride in the weight room and would push himself hard each day.”

“As a highly successful student-athlete he was pursued by many Division 1 programs as well as Ivy League schools such as Dartmouth and Columbia,” Chiola said. “Each time a college coach visited Dami, they walked away extremely impressed, with not just with his academics and football skills but the character traits of Dami the person.”

“I’ve been coaching high school football for 23 years but I don’t remember any one defensive player that opposing teams had to game plan and prepare for as much as they had to do for Dami,” he said.

“Dami is such a great kid. Rarely do we get a person who has been such a force on the athletic fields, as well as in the classroom and in our high school community.  Dami is the kind of kid that I dare anyone to try to find either a student or faculty member who could say a bad thing about him. He is that outstanding a student-athlete.”

Awoyinfa said he was surprised to learn he was being honored as a top scholar athlete.

“I know there are a lot of kids at our school that definitely excel in both the academic and athletic fields, and it’s truthfully an honor to be placed among them,” he said. “This is very special to me. I’ve worked hard the past four years to be the best I can be on the football field and in the classroom. It’s nice to know all the hard work has paid off.”

Samantha Kosty, a school counselor who worked closely with Awoyinfa, said he is a counselor’s “dream.”

“Dami is consistently striving to be the best version of himself while inspiring everyone he comes into contact with,” she said. “Dami is not your typical scholar-athlete; he is usually seen in his down time mentoring and tutoring younger students as well as volunteering in the community that he loves. His personality is magnetic and his enthusiasm is contagious. It has been an honor to get to know him and I know he will make us all proud.”

“I find genuine interest in politics and government and how the world came to be,” he said. “The IB program has definitely opened up my perspective on the world, from our mental and social studies in my IB psychology class to my diverse discussions in my IB English class, it felt like I was learning something new from my teachers every day. The knowledge I’ve gained over the past few years will definitely transcend to the college level, and my time at Linden was truthfully one of a kind.”

“I think what will stick to me the most is my bond with my teachers, that stretched even beyond the classroom,” Awoyinfa said. “They’ve meant a lot to me, and my desire to make them proud will certainly be one of my driving forces as I enter college.”

And the same goes for his coaches on the football field.

“Sports was a major factor of my life throughout my experience at Linden,” he said. “I was extremely dedicated to my football team, and I keep in contact with my coaches and my teammates almost every day. I definitely plan to remain close after high school.”

His coaches will be keeping an eye on him and expect nothing but success.

“With proper training, nutrition, and technique there is no limit to the player he could become this year as he starts his career at Rutgers competing in the Big 10,” Reinoso said, “which is one of the most competitive football conferences in the country.” 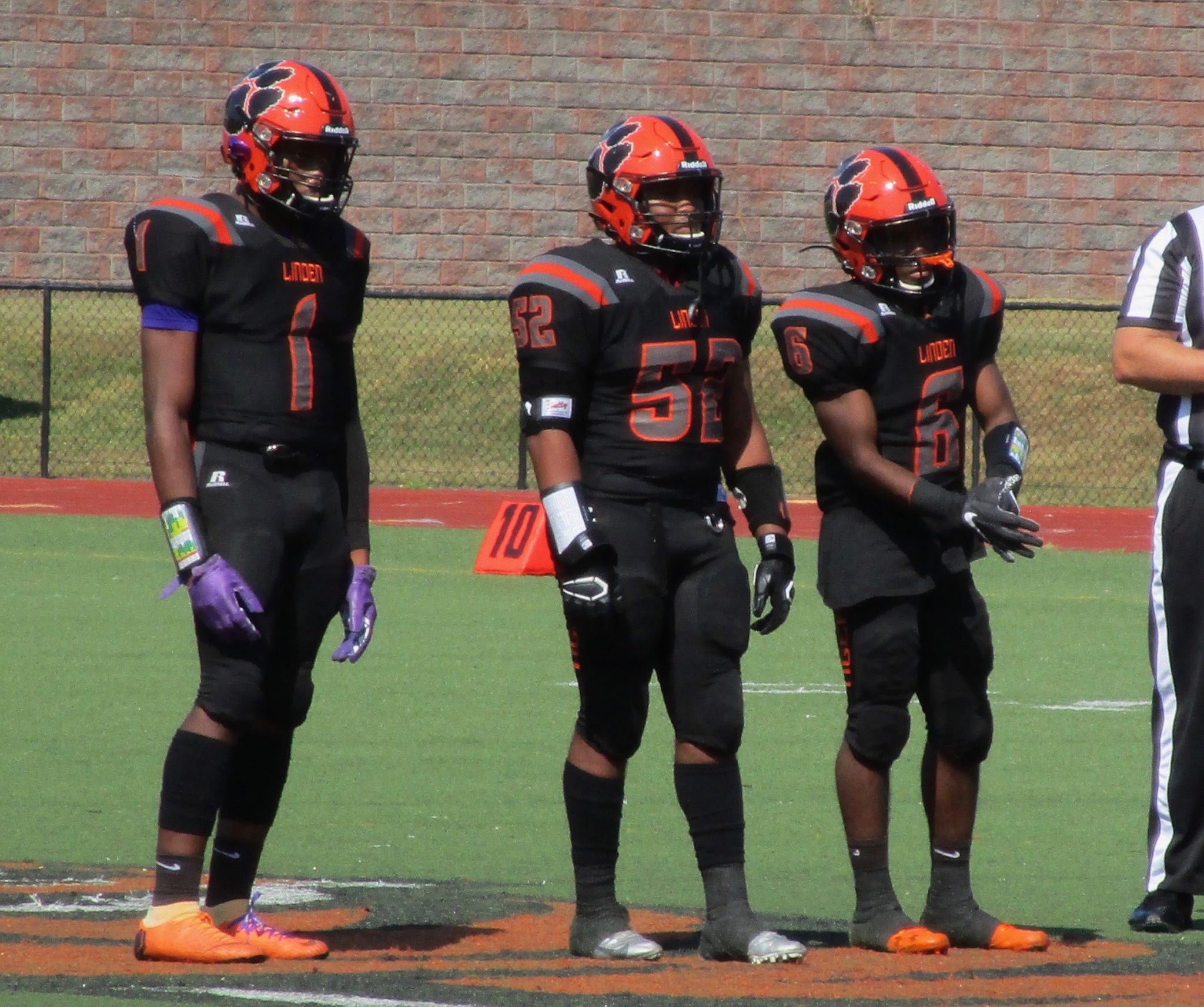 (above) Linden High School senior Dami Awoyinfa, left, who has been selected as outstanding scholar athlete by the Union County Athletic Conference, is shown at midfield for a coin toss during the 2019 season with fellow captains Darrin Williams and Caleb Davis. 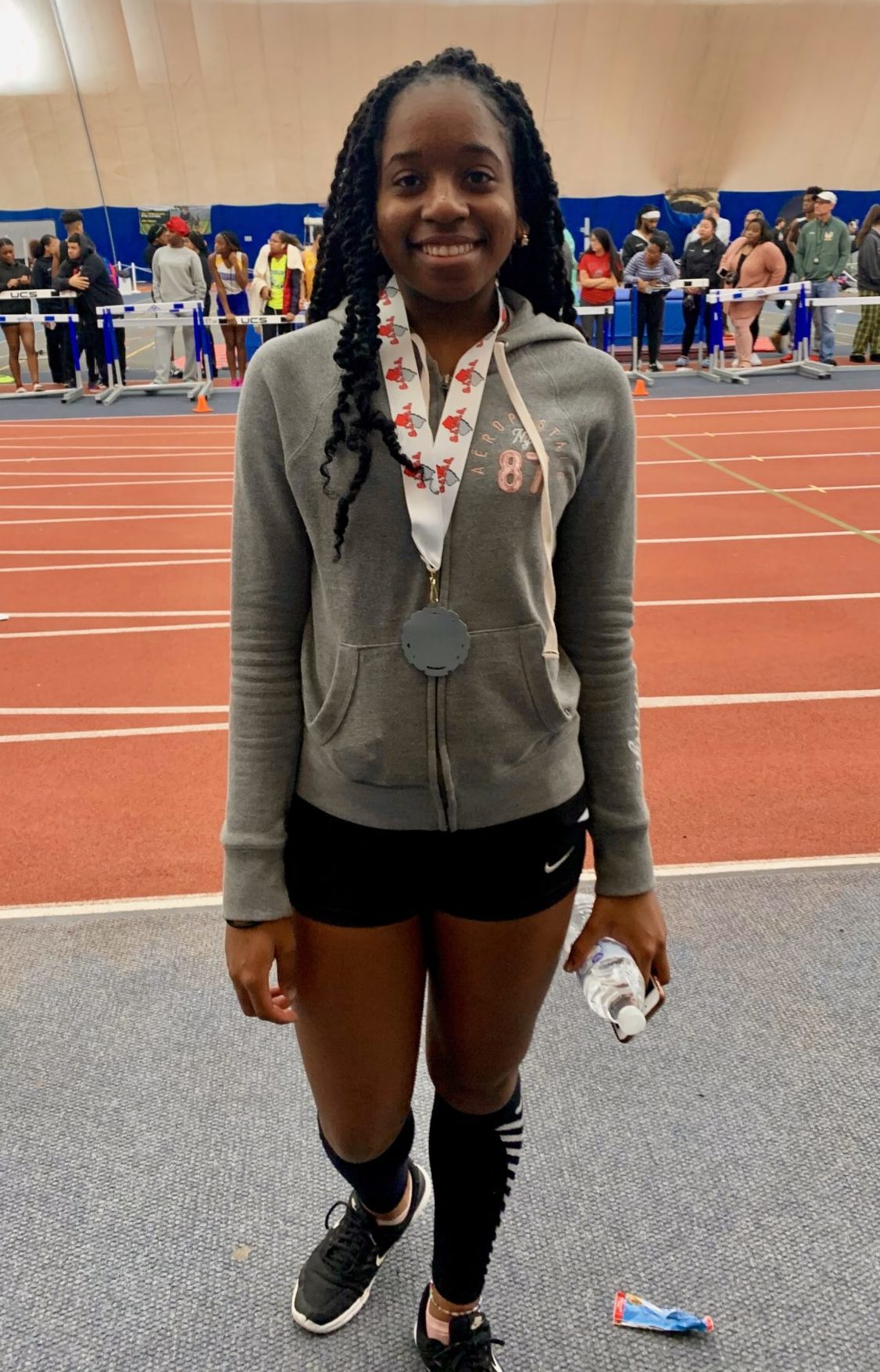 (above) Linden High School senior Chisom Uzor has been selected as outstanding scholar athlete by the Union County Athletic Conference as well as the New Jersey State Interscholastic Athletic Association.