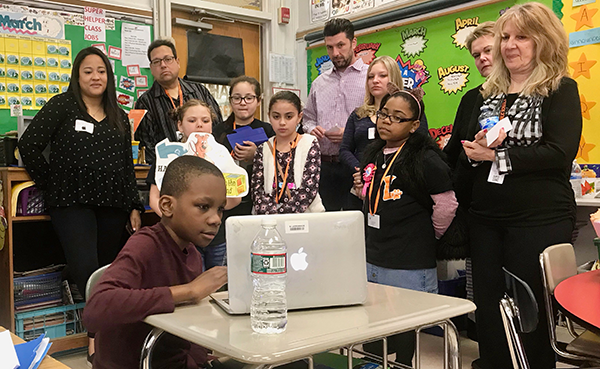 (above) A photo of Linden School No. 6 third-grader Adrien Williams won third place in the photography category in the New Jersey School Communication Awards. The photo was taken on a day when representatives of Apple visited his school and Linden School No. 8, both designated as Apple Schools. The photo shows Adrien displaying work on his MacBook Air laptop, surrounded by students and teachers, many from School No. 8.

The awards, given out by the New Jersey School Public Relations Association, represent the best work of school communication professionals in getting news and information out to students, families, and the community during the 2018-19 school year. There were 64 entries from 34 school districts. Entries were judged by 11 judges in four states, including professors and practicing communication professionals.

The honors were accepted by Linden Communication Coordinator Gary Miller at an awards ceremony at the Heldrich Hotel in New Brunswick. 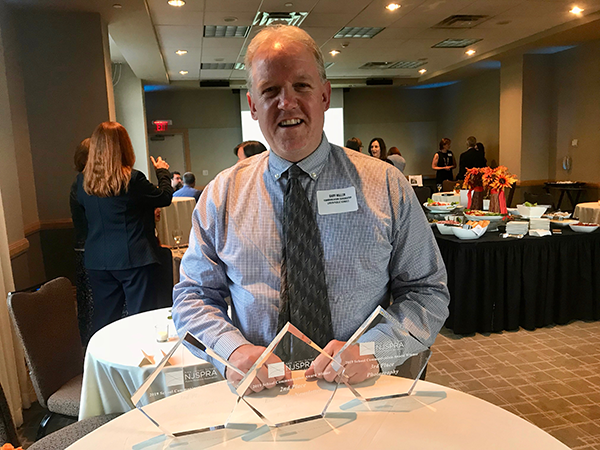 (above) Linden Public Schools Communication Coordinator Gary Miller with three awards he won at the New Jersey School Communication Awards on September 26 at the Heldrich Hotel in New Brunswick.

“Mr. Miller’s stories, photos and media highlights get the word out on all we have to celebrate in the Linden Public Schools,” she said. “His stories are often picked up by larger media outlets, and he truly deserves the recognition from the New Jersey Schools Public Relations Association. Gary is an invaluable staff member and we look forward to more great things to come as he continues to keep us in the spotlight.”

The electronic newsletter award was given for Superintendent’s Report, the district’s interactive newsletter that is sent out monthly. (The newsletter was recently renamed #LindenCelebrates for the 2019-2020 school year.) It has brief articles followed by links to longer articles and sometimes more photos and videos on the district website. The award was granted for the January and March 2019 editions.

The media relations award was given for a story about a memorial service at School No. 4 for kindergartner Sophia Thomas, who was killed along with her grandmother in a car accident last year.

The photography award was given for a photo of School No. 6 third-grader Adrien Williams on a day when representatives of Apple visited his school and School No. 8, both designated as Apple Schools. The photo shows Adrien displaying work on his MacBook Air laptop, surrounded by students and teachers, many from School No. 8.

“I’ve always liked that photo because it shows three things that are very important to all of us in Linden Public Schools,” said Miller, who took the photo. “Diversity, technology, and collaboration. It shows that we’re like a family in Linden, but also focuses on real academic achievement.”

The NJSPRA School Communication Awards were developed to recognize professional school communicators in New Jersey, and the products they develop that go above and beyond to disseminate important messages to their communities.

“Congratulations to Linden Public Schools for both the outstanding tool they have created for their audiences as well as setting a standard for all of us in this important field of school communications,” said Lori Perlow, president of NJSPRA and communications manager at Camden County Educational Services Commission.