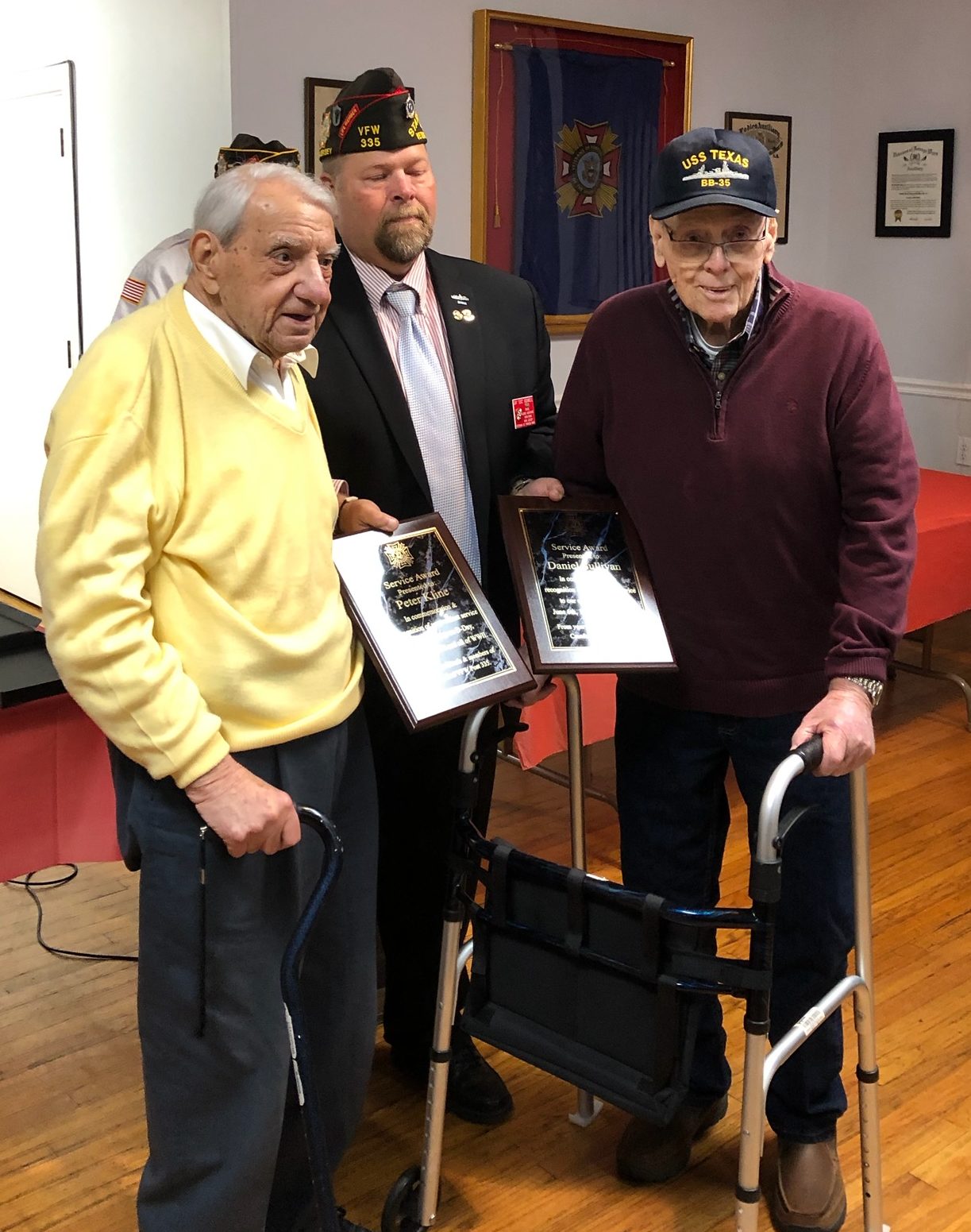 S.R.O., Standing Room Only, was, at the end, the only way to watch the recognition celebration of two D-Day veterans by Cranford’s VFW Post #335 on Wednesday, October 23, 2019. Over 100 people jam packed the VFW’s hall to honor the two distinguished veterans, Dan Sullivan of Union and Peter Klein of Cranford for their service on that fateful day of June 6, 1944.

Generously sponsored by Barry O’Donovan of Cranford’s Kilkenny House restaurant, the event featured speakers who labeled the seasoned veterans as valued local treasures and heroes in their own right. But, applause after applause found both Sullivan and Klein humbly at a loss for words as they declined the microphone for ending comments.

Peter Klein afterwards stated privately, “This was very nice, you know, and I couldn’t get over the crowd, but Danny and I were just doing our duty back then.” It seems his humility is just so typical of those from the “greatest generation”.

Oddly enough, both Sullivan and Klein grew up on the same street in Elizabeth and hadn’t seen each other in over 85 years until they coincidentally found themselves seated next to each other in a golf cart in the 2018 Cranford Memorial Day parade. “That was so funny that day,” Sullivan said, “who would have thought that could happen after so many years. And I recognized Pete right away!”

Mayor Giblin presented both honorees with a Proclamation from the Township recognizing their service at D-Day. State VFW Judge Advocate and former Cranford Post Commander Jay Boxwell presented Sullivan and Klein with plaques noting their service to our country.

Dan Sullivan raised his family of six children in Roselle and recently lost his wife of 64 years, Joan. He has since moved to Union. He is a Navy veteran and saw duty that day on the USS Texas. The Texas, a battleship, aided the invasion by providing a bombardment of the beachhead and the German gun emplacements. The battleship sustained considerable damage during the siege because of two German artillery shells which hit it, one of which luckily never exploded. Sullivan not only saw action at D-Day but was sent to the Pacific Theatre as well, serving at the famous battle at Iwo Jima and at Okinawa.

Living in Cranford for almost 50 years, Peter Klein raised two boys through the Cranford School system and claims he will never leave the town he loves. Klein, too, lost his wife Theresa several years ago.

At D-Day, Klein was a medic who rushed ashore during the third wave of the invasion on Omaha Beach. A life member of the Cranford VFW, Klein rarely speaks of his World War II days, as he saw action not only on D-Day but in the Battle of the Bulge and Hurtgen Forest in Germany as well.

Kilkenny proprietor Barry O’Donovan capped off the emotional evening with humorous but poignant remarks, reminding the crowd of the importance of patriotism and of remembering our past and those who served their country so faithfully.

The attendees leaving that night had fortunately witnessed an opportunity of seeing men who had lived history. D-Day was a critical, world changing event, the horror of which we can only imagine. And these two men, Dan Sullivan and Peter Klein were there.