Congregation Beth Israel in Scotch Plains commemorated Holocaust Remembrance Day, known as Yom HaShaoh in Hebrew, on April 23, with presentations by Peter Fleischmann and Joel Lebowitz, who shared stories of their families’ experiences as Holocaust survivors. About 70 people attended, including sixth and seventhgraders from Congregation Beth Israel’s Religious School, as well as their families, fellow congregants and community members.
Peter Fleischmann, who is a member of Congregation Beth Israel, was born in the Sudetenland, the area of Czechoslovakia that, in 1938, was the first step in Hitler’s expansion plans that eventually led to World War II. From 1938 to 1941, Peter and his family survived the Nazi occupation of Czechoslovakia and its restrictive Nuremberg laws, until they were given assistance by strangers to escape Prague and eventually make their way to New York.
Joel Lebowitz described how his family survived the Holocaust through the help of the Bielski Partisans, an organization of Jewish resistance fighters who hid in forests and fought back against Nazi occupiers. Operating in German-occupied Poland (now Belarus) between 1942 and 1944, the Bielski Partisans provided protection for Jews – including women, children and the elderly – enabling more than 1,200 Jews to survive the Holocaust.
Remembrance Day program was jointly sponsored by the synagogue’s Second/Third Generation Holocaust Survivors Group, its Men’s Club and its Religious School. The Second/Third Generation Holocaust Survivors Group creates programs to educate the public about the Holocaust and to honor and remember those who suffered and perished. 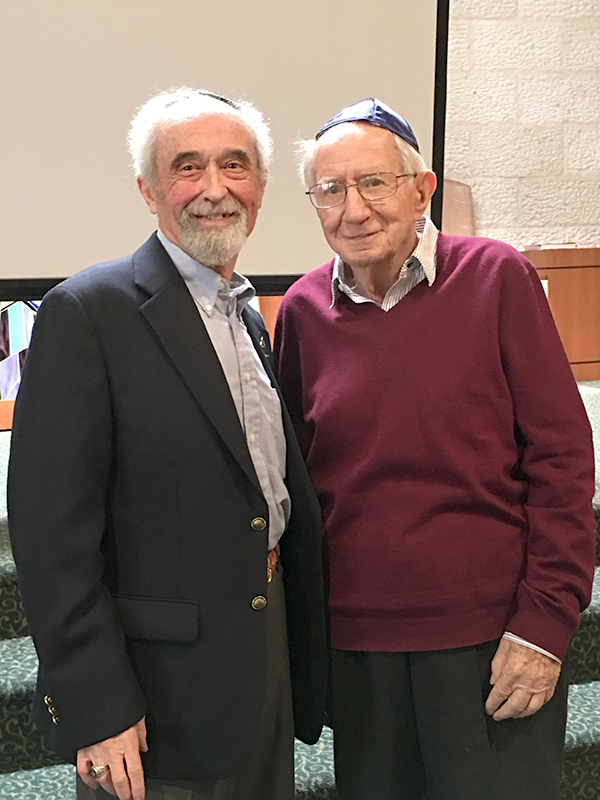 (above) Joel Lebowitz and Peter Fleischmann.