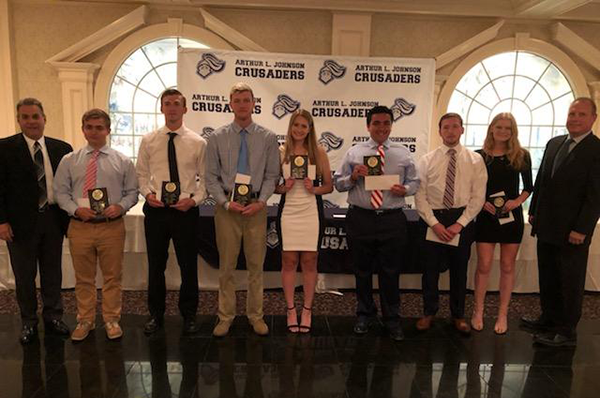 On Monday, June 10, 2019, the Arthur L. Johnson Athletic Department held their 2019 Senior Athletic Awards. The evening, sponsored by the Crusader Athletic Booster Club, was held at the Westwood in Garwood.

All the Senior Student Athletes, their Athletic Teams, and their seasons were highlighted by their coaches while handing out plaques and awards to the student athletes. Over 100 senior athletes were handed out a “Booster Club Achievement Plaque,” which signifies all of the sports programs that the senior athlete participated in throughout his or her high school career.

The program continued with the acknowledgements of all of the student athletes that will be continuing their academic and athletic careers playing the sports they love in college. The following Arthur L. Johnson High School Seniors will continue their athletic careers at the collegiate level:

The evening culminated with the announcement of multiple awards and scholarships.

The Richard Superak Field Hockey Scholarship is presented to senior field hockey players each year. Richard Superak became a fan of Johnson Crusader Field Hockey when his granddaughter, Morgan Atanasio, began playing in the fall of 2006. After winning both a County title and a State Sectional championship while she was in high school, Morgan went on to have an illustrious career at Hobart William Smith College. Morgan attributes much of her success in college to the discipline she acquired during her time as a student-athlete at ALJ. Many of Morgan’s teammates also had stellar college field hockey careers. Richard Superak has remained a fan of Johnson Field Hockey, becoming a fixture in the JFH Family. This year, he decided to continue a scholarship foundation that will assist in the collegiate efforts of former Crusader Field Hockey players. The 3rd Annual Richard Superak Field Hockey Scholarships are awarded to Alyssa Colicchio, Kaylee Parkhill, and Amanda Zambrana.

The Jeffrey Felter / Michael Sot Memorial Scholarship Presentation is given to one senior baseball player each year. Its origin began a few years ago as the baseball team, led by Coach Dave Kennedy, honored our 1974 alumni with a 40th Year Anniversary of the 1974 State Sectional Championship Baseball Team. That day was highlighted by the announcement that our alumni would be donating a scholarship in honor of one of their classmates that had passed away. This has expanded this past year in order to also honor Michael Sot along with their friend. The 5th Annual Jeffrey Felter Memorial Scholarship was awarded to Nicholas McCaffery.

The recipients for the Book Scholarship were (Female Athlete) Kylee Zawacki and (Male Athlete) Anthony Bogash.

Finally, former Athletic Director of Arthur L. Johnson High School, Mr. Carl Peterson, presented the Thomas Santaguida Sportsmanship Scholarship. The Booster Club recognizes Tom Santaguida for all his efforts and professionalism while serving as the Athletic Director at ALJ for six years. Tom was a model of sportsmanship, ethics, and integrity and an example for all of us to follow. In his memory the ALJ Booster Club annually awards scholarships to students who exhibit the qualities that Tom was so well known for. The recipients always treated teammates with respect, they won and lost with dignity, they respected the judgment of officials, and accepted seriously the responsibility and privilege of representing Arthur L. Johnson and the communities of Clark and Garwood.

The Athletic Director, Gus Kalikas, had this to say about the event: “The Senior Athletic Awards are a wonderful event that allowed the administration, teachers, coaches, parents, and student athletes a chance to reflect on a wonderful four years competing as an Arthur L. Johnson High School Crusader while honoring our senior student athletes for their remarkable accomplishments. Although the contributions from this senior class were great and will be missed, we look forward to seeing what they can accomplish in college over the next four years.” 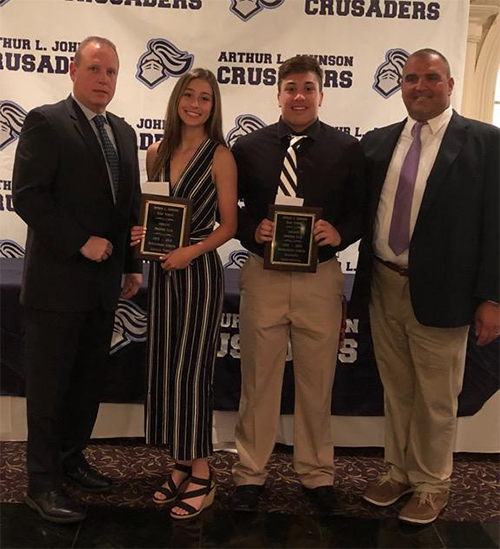 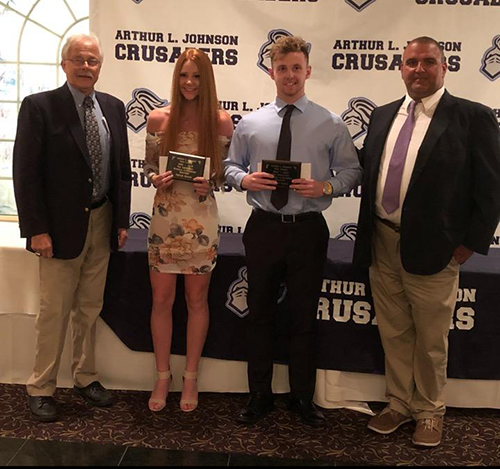 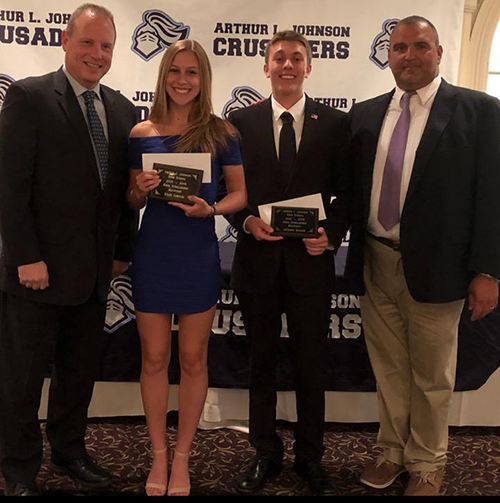 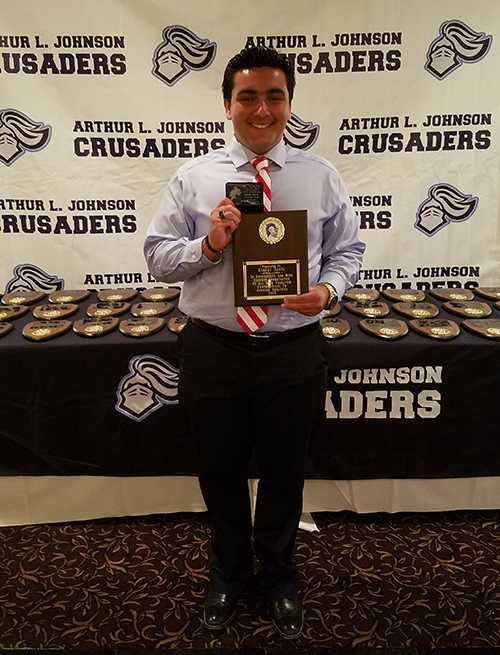 (above) The recipient of the Outstanding Contributions to Crusader Athletic Award, Robert Dante. 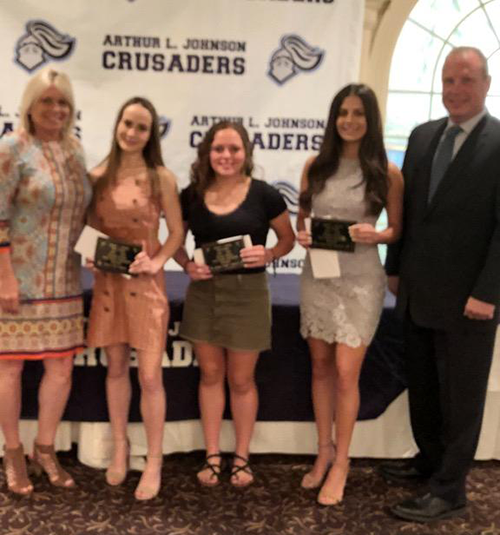 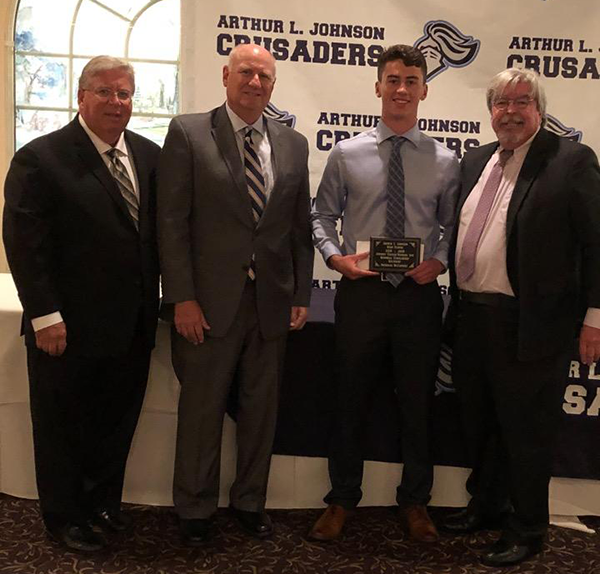 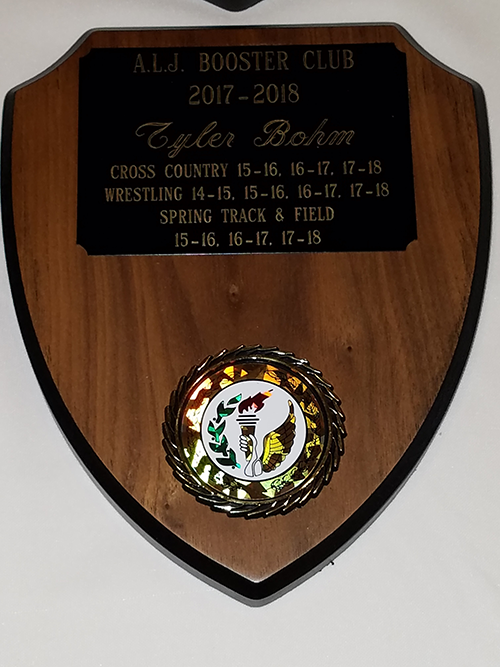 (above) The Booster Club Achievement Plaque given to every Crusader Senior Athlete.