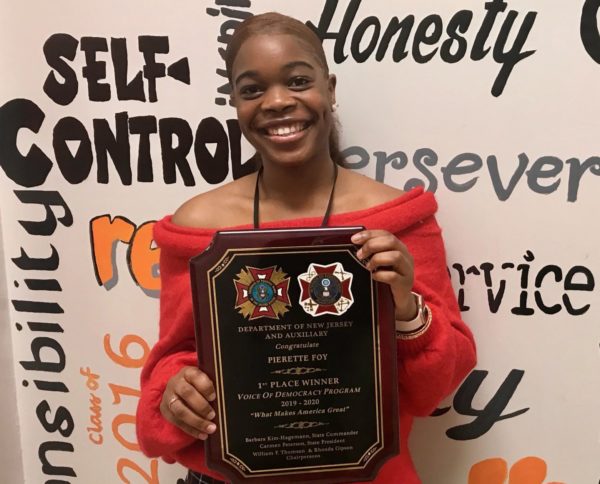 “No one truly belongs to this country, and yet that makes us all American. There is no true race or religion, yet I have been standing for the Pledge of Allegiance in homeroom every day since I was 6 years old. The color of my skin and my religion will not interfere with me getting my education because differences are accepted and normalized.”

Those are the inspiring words written and spoken by Linden High School senior Pia Foy in her entry into the VFW Voice of Democracy spoken essay contest, which asked contestants to say, “What Makes America Great.” Inspired by her own family’s history as immigrants from Cameroon and Martinique and her own love for America, Foy delivered a powerful four-minute oratory.

And she was rewarded for it. Foy won first place for all of New Jersey, besting over 1,000 other students from around the state. She also traveled to Washington, D.C., on February 28 for the national competition and came away with a $2,000 scholarship and a new computer.

“It feels amazing,” said Foy. “I didn’t know there were going to be so many applicants.”

She said she was excited just to be chosen as the winner of Veterans of Foreign Wars District 5, which covers Union County. But then all the district winners were brought together on February 1 in Toms River for a statewide awards dinner. Foy said she was very impressed by the other contestants.

“One thing that definitely surprised me was hearing all the other kids and hearing how amazing they were,” she said. “One girl got accepted into Princeton, and one boy researched history in his free time. I was sizing myself up, like, ‘Can I really compete with people of such a high caliber?’ They were so amazing. So I was definitely extremely surprised when I found out that I won.”

Aside from the contest, Foy was impressed by the atmosphere at the awards dinner, where she and the other contestant were given a standing ovation as they entered. The room was filled with VFW members, active duty military, and military families. She was especially grateful for all the members of VFW District 5 in attendance.

“They were all there supporting me,” Foy said. “There were a lot of districts there and District 5 was definitely the loudest!”

Interim Superintendent Denise Cleary said the whole district is proud of Foy’s great accomplishment.“Pia’s amazing essay, delivered with such passion, truly embodies our district credo of ‘Respect for Diversity’ by showing that we all come from different backgrounds but are one American family,” she said. “She was up against some excellent competition from around New Jersey, so everyone in Linden should feel tremendous pride that she was selected above them all.”

Excerpt of Pia’s essay: “America. A country built off bloodshed and the work of man’s ancestors. Yet, not bitterness. Rather desire for the future. The United States is a melting pot of people of different colors who are treated equal.”

Foy, who plans to study biochemistry in college, said that a spoken essay presents different challenges from a written essay.

“You have to be mindful of different cadences and different patterns that you put into it,” she said. “Some things are better said than written down. I wanted the essay to be powerful, and one of the ladies there told me the reason I won is because of the passion in my voice.”

The rules for the Voice of Democracy contest stipulated that the spoken essay be between two and four minutes.

“That was extremely hard,” Foy said. “I had to keep rewriting it and revising it. The guidelines were very strict, so it was a little more difficult than writing a regular essay with a word count or page count.”

She wanted to thank all the people at LHS who helped her, including her mother, Assumpta Foy, a French teacher at LHS; counselor Laurie Juliano, who told her about the contest and pushed her to enter; Kate Walker, her English teacher who taught her to write “perfect” essays; and Anthony Fischetti, coordinator of the International Baccalaureate program who helped her refine her essay.

“Thank you to everyone who helped me and pushed me to do this,” she said.

Excerpt from Pia’s essay: “So if someone poses the question, what makes America great, the answer may vary between person to person, because everyone’s experience is different. However, what truly makes this country great is the fact that it’s called home. United we stand.”