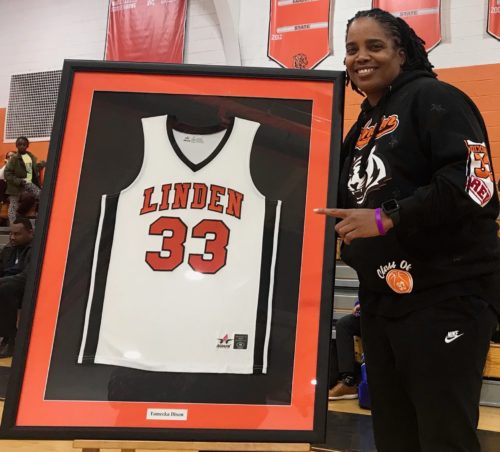 (above) Former Linden High School basketball star Tamecka Dixon with her retired No. 33 jersey, which was retired at a ceremony on February 24.

Linden High School retired the No. 33 of legendary girls basketball star Tamecka Dixon on Monday, February 24, 2020, at an emotional ceremony held in the school’s gym.

Dixon entered through lines of student athletes to great applause and fanfare, into the gym where she dominated opponents as a star for the Lady Tigers in the early 1990s. Dixon, Class of 1993, was twice selected to First Team All-State and her career total of 2,092 points remains a school record among both girls and boys, and went on to star in college and as a professional.

“Wherever I went and played around the world, I always made sure people knew I was from here,” Dixon said in remarks to the crowd of hundreds of family, friends, fans, and students who packed the gym to honor her. “Coming back to this gym brings back amazing memories. I couldn’t do anything without the village I come from.”

Director of Athletics Steven Viana, who acted as master of ceremonies, praised Dixon for what she has meant to Linden Athletics.

“Tamecka, you and the No. 33 will eternally be part of the Linden family,” he said after reading off a long list of Dixon’s accomplishments in high school, as well as at the University of Kansas and in the WNBA.

In fact, Viana joked from the podium that he couldn’t find the paper with Dixon’s stats and asked LHS senior basketball player Faith Reddick for help. Reddick then pulled out a sheet of paper that kept going and going, stretching about 20 feet from the podium, to a round of laughter and applause from the crowd.

Dixon was chosen 14th overall in the first ever WNBA draft by the Los Angeles Sparks in 1997, and went on to win two championships and was selected to three All-Star Games.

“As a school district, we are always proud of the accomplishments and successes of all of our students,” said Cleary, who was a science teacher at LHS when Dixon was starring on the court. “But there are certain times when some stand out a little more than others. There is no doubt that Tamecka is our most accomplished student athlete, and the retirement of her jersey symbolizes the admiration, respect and pride that we have for her.”

Armstead spoke to the LHS girls basketball team that sat in front of the podium during the ceremony. He told them he hopes they would get a chance to see old films of Dixon playing to see “basketball at its finest.”

“Your career is rooted right here in Linden, and your achievements are nationally renowned,” he said. “Thank you for modeling the way, not only for our young women, but for all of our athletes.”

Viana presented Dixon with a framed No. 33 jersey, then directed her to uncover a sign that will hang in the gym honoring her. But instead of uncovering the sign herself, Dixon grabbed former teammates out of the crowd to join her in the ceremonial unveiling.

When Dixon spoke to the crowd, she praised those teammates.

“If I thank everybody individually, I’d be here all night,” she said. “But I do want to give a special shout-out to all the players I played with here in Linden. When we stepped on this court, we wanted to represent this city and we gave it our all. I came in with so much pride for how we put on for our city. I could not have done anything here without my teammates. They were everything to me. Really, they should be standing here behind this podium with me.”

Dixon is the third Linden student-athlete to have their number retired. Football star Muhammad Wilkerson, Class of 2007, had his number retired in 2017. Dixon’s name hangs in the gym opposite boys basketball star Desmond Wade, Class of 2008, who was in attendance at the ceremony.

“I thank everyone for coming out,” Dixon said. “You could have done anything else tonight, but you chose to come and spend it with me, so thank you.” 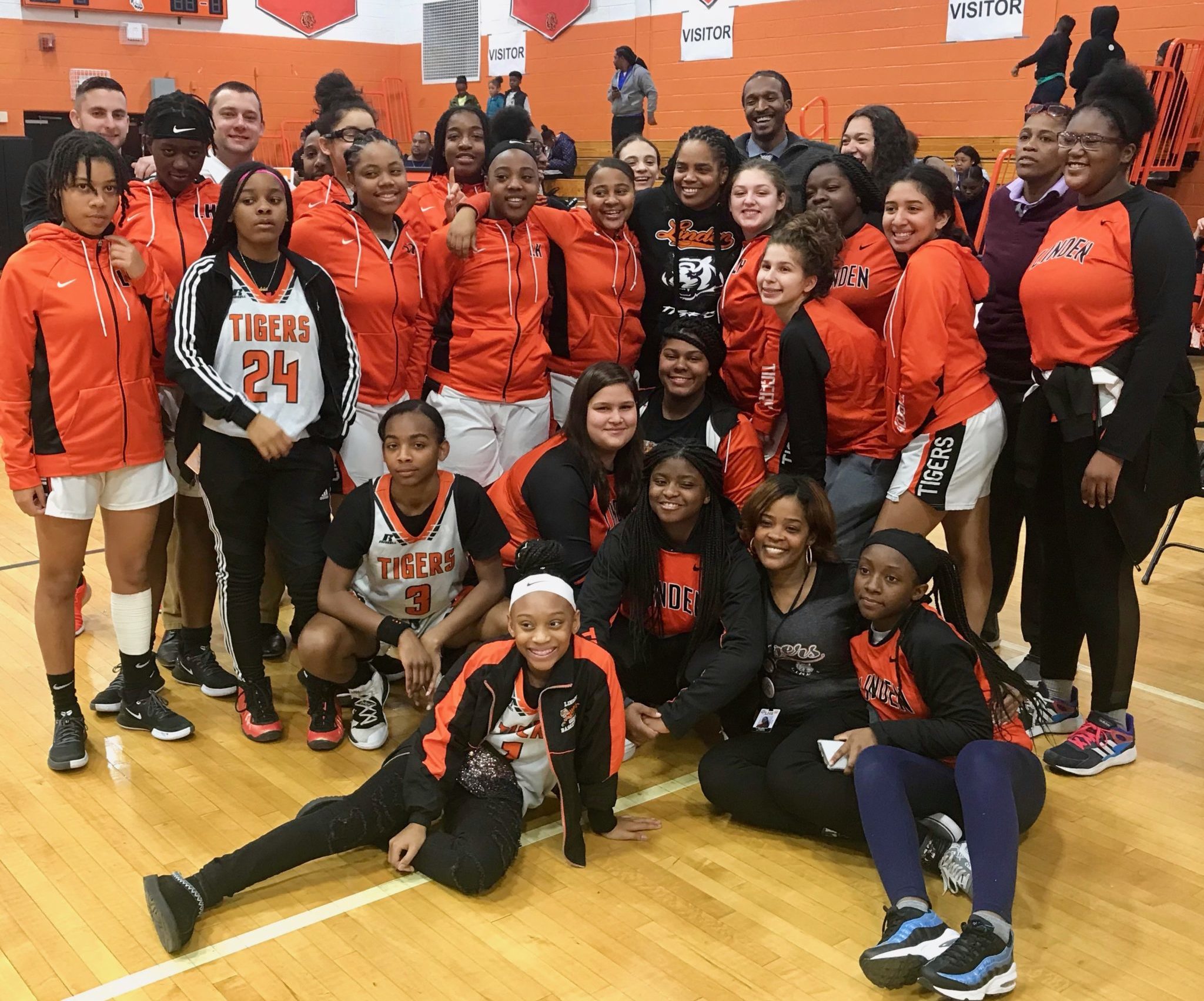 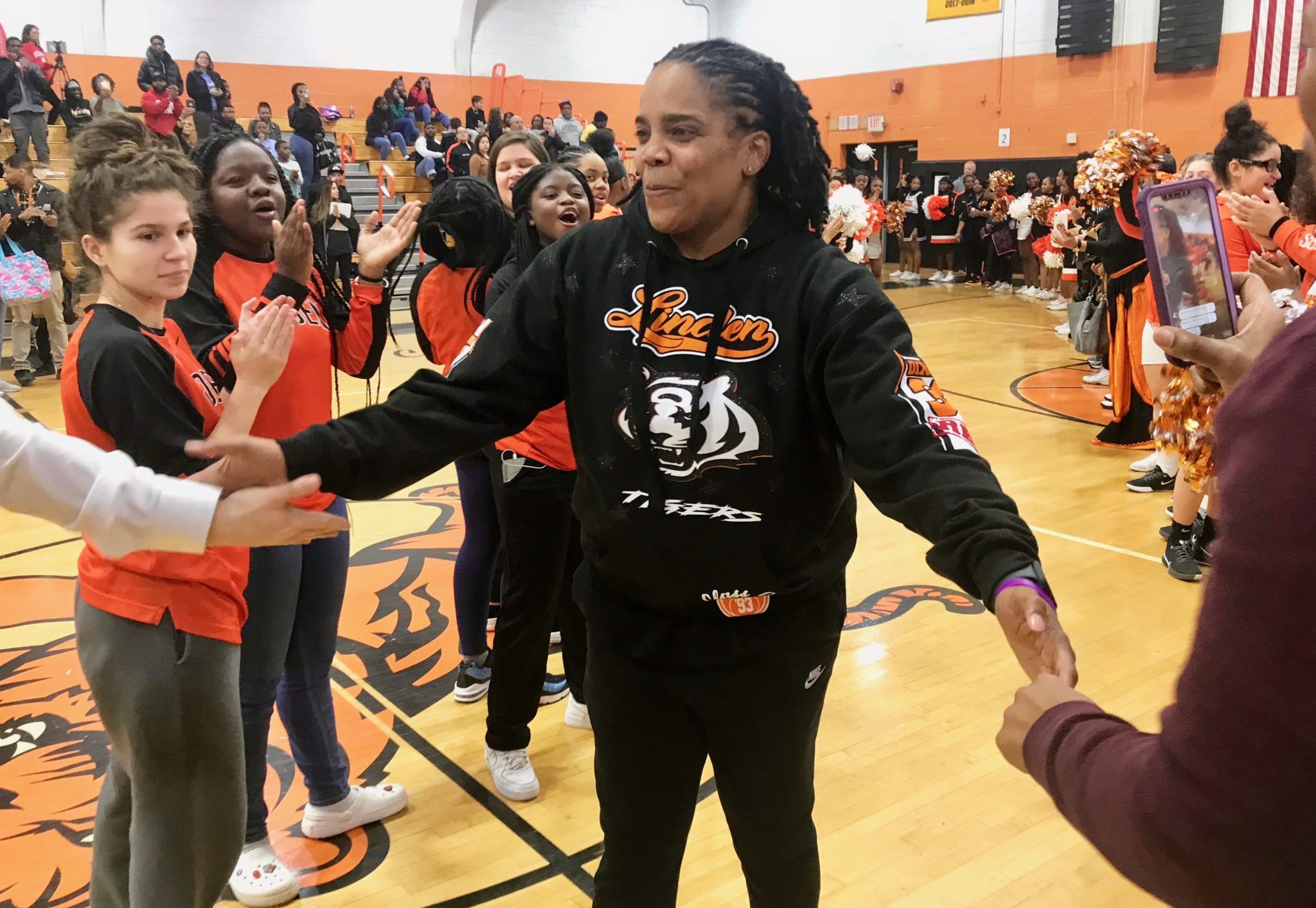 (above) Former Linden High School basketball star Tamecka Dixon enters the gym to applause at her jersey-retirement ceremony on February 24.