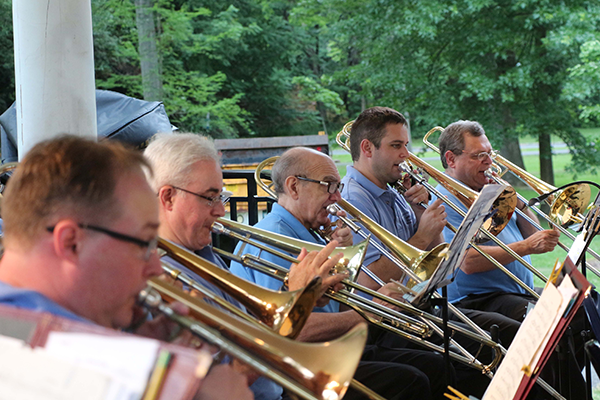 (above) The Westfield Community Concert Band presents its annual Summer Concert Series in Mindowaskin Park, Westfield, with upcoming performances on July 4, 11 and 18 at 7:30 p.m.

The Westfield Community Concert Band, under the direction of Dr. Thomas Connors, continues its 107th season with its annual Summer Concert Series in Mindowaskin Park, East Broad Street, Westfield. The band will be performing three more Thursday evening concerts on July 4, 11 and 18, 2019. All concerts begin at 7:30 p.m. and are free to the public.

Highlighting this season’s summer concerts will be a special Independence Day program taking place on July 4 featuring vocalist Kerry Stubbs and appearances by the Westfield Chapter of the Sons of the American Revolution and the Westfield Town Crier. The concert series will also include the band’s premier performance of Old American Songs, by the renowned American composer, Aaron Copland, with vocalist Karen Hauge. All of the band’s summer concerts will include popular Broadway selections, marches, classical works and many patriotic compositions.

The band rehearses each Wednesday evening from 7:30 to 9:30 p.m. in the Community Room in the Westfield Municipal Building, 425 East Broad Street. The band’s membership includes musicians from ages 18 to 80, including many active and retired music educators. Under the baton of conductor Dr. Thomas Connors, director of Instrumental Music Studies and an assistant professor of music education at Kean University, the band continues to perform a wide variety of concert band literature, including many contemporary compositions. Experienced area musicians who are interested in a position with the band for next season should contact band president Barry Rosenberg at 908-337-9073 or info@westfieldcommunityband.com.

The band’s Summer Concert Series is sponsored in part by the Westfield Recreation Department, Don Bogardus, Director. Chairs and blankets are recommended. In the event of rain, the concerts will take place in the Westfield Community Room, located in the Westfield Municipal Building.