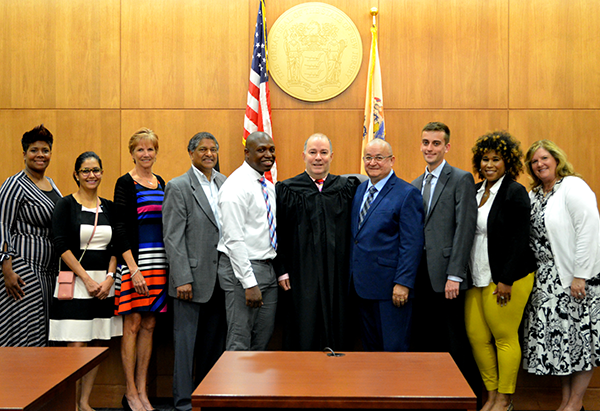 Two Westfield residents — Adrian Lobo and Beth Rudnick — are among the latest community volunteers to successfully train as advocates for Union County youth removed from home due to abuse or neglect, and now living in foster care. Court Appointed Special Advocates (CASA) of Union County is the only organization serving as extra eyes and ears for family law judges in an effort to protect best interests and ensure needs are met.

Before being sworn in, Lobo shared, “Children are the future of our country and through no fault of theirs, some have been abused, neglected and abandoned. Desmond Tutu said, ‘Hope is being able to see that there is light despite all of the darkness.’ I am motivated and committed to helping these children who deserve a better future.” His classmate, Rudnick, takes her oath at a later date.

As the soon-to-be advocates arrived at the courthouse, Judge Richard Wischusen continued his practice of exiting his courtroom to greet and speak with the waiting volunteers. Later, while on the bench during the ceremony, he commended each for their commitment to the community’s fragile child victims, and discussed the value of the CASA program to those children and case stakeholders, noting he always reads the CASA report and seeks their input during hearings.

Volunteers with varied backgrounds make successful advocates and this class, ages 24 to 71, is no exception. Each brings diverse experiences, including an adoptee, an adoptive parent, former military, immigrants, nonparents and parents, retirees, full- and part-time employees, and undergraduate and graduate students. Professional backgrounds include education, retail, nonprofit, information technology and academia. Most had no prior knowledge of the foster system.

The final step before meeting their assigned foster youth is observation of seasoned CASA volunteers in court. Once assigned to the case, a court order grants access to the child, foster parents, doctors, caseworkers, therapists and teachers, enabling advocates to make informed recommendations in the child’s best interests.

There are approximately 500 Union County youth from birth to age 21 in foster care, and more than 200 are waiting for a CASA volunteer. Is that you? Contact Courtney at cgreen@casaofunioncounty.org or 908-293-8136 to learn more.