Union County Performing Arts Center Presents “Out of the Woods” 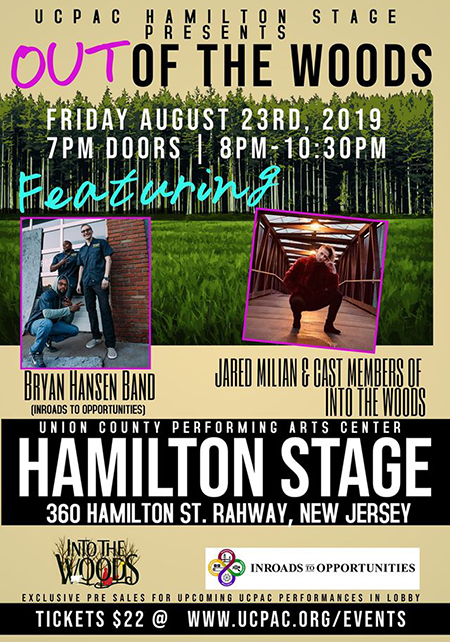 Out of The Woods’ Performance to Benefit Inroads to Opportunities

Out of The Woods’ Co-Production will benefit Union County Charity Inroads to Opportunities: a night of music featuring Bryan Hansen Band with Jared Milian and the cast members of UCPAC’s production of Into the Woods! On Friday August 23rd, 2019. Doors open at 7 p.m. Performance begins at 8 p.m. Tickets are $22, purchase online: www.tinyurl.com/hamiltonstage2019

Inroads to Opportunities is a 501c3 not for profit organization located in Union County, New Jersey. Since 1959 they have provided vocational rehabilitation services to individuals with disabilities. Inroads to Opportunities works with 400+ people per year in their pursuit of employment, wellness and a life of independence. The charity owns and operates Railside Cafe in Fanwood, NJ. Its location is a competitive integrated environment for individuals with disabilities who want to learn how to work in the fast paced restaurant business.

Bryan Hansen Band is a Funk, Blues, Alternative rock band from Central New Jersey. The band’s latest album titled ‘Gas Money,’ is set to be released in the Fall of 2019. You can follow the Bryan Hansen Band on Facebook, Instagram, Twitter, and YouTube, as well as track them on the Bands In Town app, stream them on Spotify, and join their email list on their official site: www.bryanhansenband.com

ICON 2018 winner, Jared Milian, has chosen Into the Woods as his dream show. The wildly popular musical by Stephen Sondheim and James Lepine intertwines the plots of several Brothers Grimm and Charles Perrault fairy tales, exploring the consequences of the characters’ wishes and quests. Jared will be playing the role of the Witch. http://www.ucpac.org/event/fce3e42c2118ba2567f8175f8b69d0f9