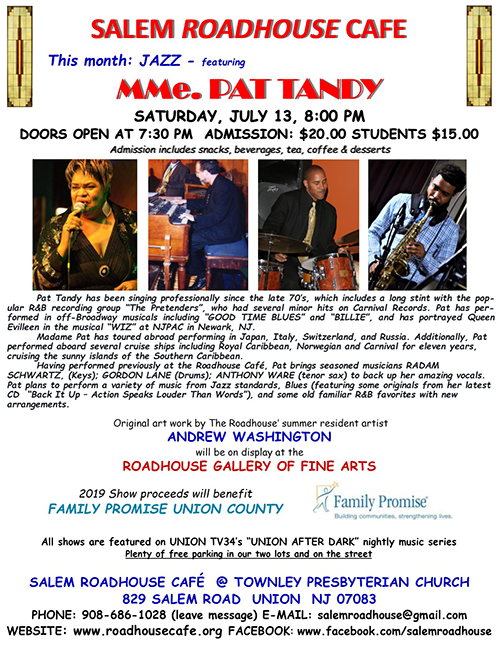 Pat Tandy has been singing professionally since the late 70’s, which includes a long stint with the popular R&B recording group “The Pretenders”, who had several minor hits on Carnival Records. Pat has performed in off-Broadway musicals, including “Good Time Blues” and “Billie”, and has portrayed Queen Evilleen in the musical “Wiz” at NJPAC in Newark, NJ.

Having performed previously at the Roadhouse Café, Mme. Pat brings seasoned musicians Radam Schwartz, (Keys); Gordon Lane (Drums); and Anthony Ware (tenor sax) to back up her amazing vocals. For this performance, Pat plans to perform a variety of music from Jazz standards, Blues (featuring some originals from her latest CD “Back It Up – Action Speaks Louder Than Words”), and some old familiar R&B favorites with new arrangements.

This show will feature original artwork by The Roadhouse’ summer resident artist Andrew Washington, with his works on display for all to enjoy and experience at the Roadhouse Gallery of Fine Art.

Plan now for an evening of great music in Northern New Jersey’s Most Intimate Coffeehouse™.

The Roadhouse Café has always offered its stage to local and independent mainstream musicians. It’s a clean, safe place for people who enjoy listening to live music, in a world of clubs and bars. Jazz, rock, folk and other groups have performed. During the past eleven years well over 100 different entertainers have appeared. Local fine artists also display their works. The musicians who play the Roadhouse often ask to return as soon as possible. The Roadhouse has given them a place with a beautiful stage, good acoustics, a live, attentive audience, and a sound system that is first class.

Now nearly into its twelfth year of operation, the Salem Roadhouse Café features many of the performers who have graced the stage in the past, as well as talent that is new to the Café stage. The current season will benefit Family Promise.

The Salem Roadhouse Cafe is located at 829 Salem Road, Union, NJ 07083. Visit online at roadhousecafe.org or facebook.com/roadhousecafe. Reach by phone at 908-687-1028 (leave a message and a return number). 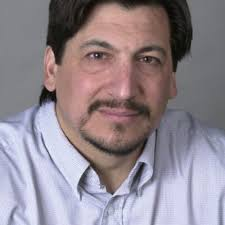