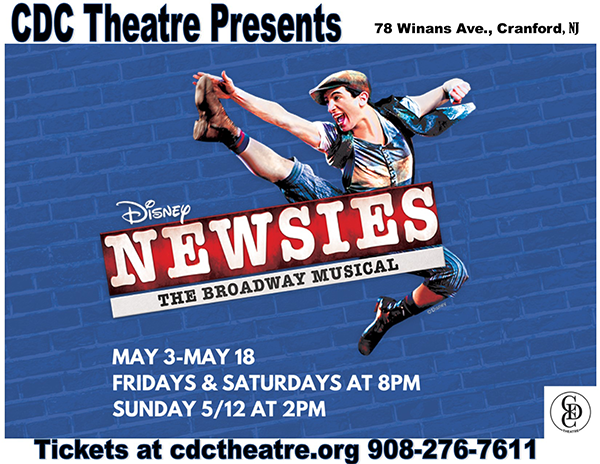 Disney’s Newsies Coming to Cranford CDC Theatre in May!

CDC Theatre in Cranford will finish out its 100th Season in spectacular fashion! Disney’s Newsies will come dancing into the theatre, at 78 Winans Ave., in Cranford on May 3rd and run until May 18th. Based on the 1992 motion picture and inspired by a true story, Newsies features a Tony Award-winning score by Alan Menken (Little Shop of Horrors, The Little Mermaid, Aladdin) and Jack Feldman and a book by Tony Award winner Harvey Fierstein (Kinky Boots).

Set in turn-of-the century New York City, Newsies is the rousing tale of Jack Kelly, a charismatic newsboy and leader of a band of teenaged “newsies.” When titans of publishing raise distribution prices at the newsboys’ expense, Jack rallies newsies from across the city to strike against the unfair conditions and fight for what’s right! Director John Menter recently talked about the show. “Newsies is a family friendly musical about the “little guys” taking a stand for what’s right. It’s based on a true story and perfect for CDC’s 100th Anniversary Season. CDC is a great theater to work at. It’s a beautiful space to create in and the creative process is supported by a dedicated production team and crew. The cast includes some of the most talented performers that I have had the pleasure of working with. Singers, actors and dancers that give you 110% all the time. The audiences will be amazed by this talented cast. Beautiful singing voices combined with powerhouse choreography and dancing that will blow you away!”

The large, intergenerational cast will take the stage on May 3-18, 2019, Fridays and Saturdays at 8 p.m. with a 2 p.m. matinee on Sunday, May 12. Additional information about the show and how to get tickets can be found by visiting cdctheatre.org. For best prices and selection, tickets can be purchased on line at Brown Paper Tickets.